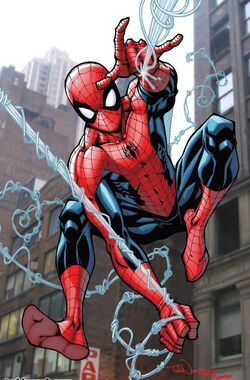 Single
Occupation
High school student, adventurer, leader of the Avengers
Origin
Origin
Arachnid superhuman who became a superhero and joined the Avengers to lead them.
Creators

I learned early on that great power and responsibility go hand in hand. I've got the power. And it's my responsibility. To be an Avenger.

Peter's history is very similar to his other-world counterparts. He was the child of Richard and Mary Parker, both of whom entered Witness Protection when he was very young. He was raised by his aunt and uncle, both of whom spoiled him intensely. He had few friends growing up, due to his advanced intelligence. This would often lead him to get bullied. But he had a confidant in his aunt and uncle, and was almost always happy. His place was in matters of science and super-powers, things that seemed beyond his world.

He soon heard of a radiation experiment that he had heard rumors of for months. He decided to attend the experiment, along with his uncle. At the experiment, he was bitten by an irradiated spider. He soon discovered that he gained the spider's abilities. His uncle told him about how power and responsibility went hand in hand. when they ventured home, his Aunt May had been found shot to death by a burglar. After finding and incarcerating the man who shot her, Peter took his uncle's lesson to heart, and decided to use his powers to fight crime as Spider-Man.

He started off with a shaky career, but soon gained more fame in the eyes of the public. He was still small-time, but respected by other superheroes. Soon, though, he approached first the Fantastic 4 and then the Avengers in hopes of joining. The F4 turned him down, but the Avengers accepted him. He became the first recruited member of the team. But when everyone but him disappeared from the team, Spidey was the only one left. He was left to recruit some heroes, so he chose the new superhero U.S.Agent, and the vigilante duo Cloak and Dagger. These members were made the new Avengers, and soon 6 more members joined the team. This started a new era of Avengers, co-led by U.S.Agent and Spider-Man.

Soon, he realized how hard it was to split his life between Spider-Man, Peter Parker, and an Avenger. The split was tearing all three lives apart. So, to ease the split, he granted his power and responsibility to his best friend, Miles Morales. So he took the codename Arachno and took Spider-Man's solo gig. Spider-Man continued to act as an Avenger, easing his burden.

When he was bitten by the radioactive spider, Peter gained many proportionate abilities of a spider, including...

Super-Strength: Spider-Man can lift in excess of 10 tons, also affording him superhuman leaping of over 40 feet.

Wall-Crawling: Spider-Man can cause his body to adhere to any substance he touches, also allowing him to walk on walls or prevent items from being taken from his hands.

Super Speed: Spider-Man can run nearly as fast as a speeding car, in excess of 60 miles per hour.

Super Stamina: Spider-Man can fight for hours before fatigue impairs him, and he can hold his breath for 8 minutes.

Super Durability: Spider-Man has durability sufficient to allow him to be struck by super-strong people or fall from a skyscraper with little harm.

Super Agility: It is said that Spider-Man possesses the agility and reflexes to dodge gunfire, enough like the top 20 Olympic athletes combined.

Healing Factor: Spider-Man's powers prevented the further need for glasses, and are able of healing broken bones and blindness in days.

Spider-Sense: Spider-Man has a danger sense warning him of danger via a tingle in the base of his skull, coupled with his reflexes, this allows him to avoid most injuries.

Peter is two years ahead of his school peers mentally, and is being considered from the world's top universities. He was capable of inventing web-shooters.

Equipment: Peter was able to create web-shooters that allow him to fire dissolvable strands of webbing that are as sticky as his ability.
Transportation: None known.
Weapons: None known.

Retrieved from "https://marvelcomicsfanon.fandom.com/wiki/Peter_Parker_(Earth-5)?oldid=255701"
Community content is available under CC-BY-SA unless otherwise noted.