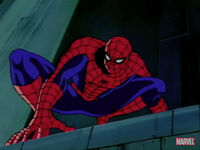 Brown
Unusual Features
Microscopic hairs across his body that allow him to cling to many surfaces.
Status
Citizenship

Married
Occupation
CEO of Parker Industries, Professional Photographer (formerly)
Education
Master's Degree in Biophysics, and a Doctorate in Biochemistry.
Origin
Origin
After being bitten by a radioactive spider, Peter Parker became the amazing Spider-Man! Unfortunately, his uncle was killed by a burglar, in which Peter took vengeance and learned the ultimate life lesson.
Place of Birth
Queens, New York City
Creators

And on that fateful day, I learned that with great power, there must also be great responsibility!

Peter Parker's history is nearly identical to his 616 version, until the "Brand New Day" arc. His aunt died after the Civil War event, in which he took himself and Mary Jane, his wife, to his aunt's funeral. There, he determined he would keep a much more watchful eye on his family.

Retrieved from "https://marvelcomicsfanon.fandom.com/wiki/Peter_Parker_(Earth-4)?oldid=208319"
Community content is available under CC-BY-SA unless otherwise noted.