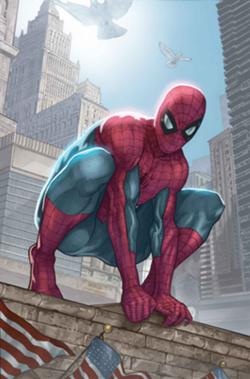 The first problem young Peter faced was the lack of money with the death of his uncle. Due to the fact that his Aunt May was too weak to work and Peter was seen as fragile, he decided to get a job, even though Aunt May wanted him to become a scientist instead. Peter even thought about using his spider powers for crime, but decided against it after thinking how his Aunt would react to him in jail.

However, it was seeming impossible to him to find a job in order to pay his growing debts. As Spider-Man, he was not able to continue his career as TV star, because of J. Jonah Jameson, owner of the NOW magazine and the newspaper Daily Bugle. Jameson started a campaign against Spidey, stating that he was a bad influence for children and a criminal for taking justice into his own hands, referring to the situation with the burglar. These protests start taking effect and turning the public against Spider-Man, causing Spidey's manager to leave him, impeding his ability to earn money even as Spider-Man.

Peter searched through the wanted ads, only to be rejected by all the employers. Not being able to use his super-powers as Spider Man infuriated Peter, and his fury only intensified after seeing his Aunt May selling her jewelry to try and earn some money.

Peter was happy wit his new life, he was doing great with his new girlfriend Mary Jane Watson and with his life as Spider-Man. Peter had to fight villains such as Doctor Octopus, The Chameleon, Kraven the Hunter, Green Goblin and many more.

Transportation: Peter uses his artificial web to swing from building to building; when with his fellow teammates Peter travels in the quinjet.
Weapons: None known.

Retrieved from "https://marvelcomicsfanon.fandom.com/wiki/Peter_Parker_(Earth-3220)?oldid=255698"
Community content is available under CC-BY-SA unless otherwise noted.