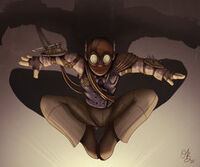 Peter Benjamin Parker (of Earth-319) also known as Spider-Man or the Steam Spider-Man, is a fictional superhero. He is also a founding member of the Avengers.

Peter grew up in Upper World (formerly New York City) shortly after Ultron took control. Peter loved anything science related and also was fond of mechanics. One day while messing with machines a spider bathed itself in some chemicals. Peter grabbed the vile and began to shake it however the spider dropped and bit him. Startled he fell over and knocked down several different vials creating an adhesive chemical compound. He then invented a pair of shooters.

Using the compound he also made a pair of adhesive boots and gloves to use. Inspired by comic superheroes he decided to become a vigilante. Using a makeshift costume he become very powerful around the youth of Upper World. One day a noticed a crook who had robbed a store. Believing that the "Bodies" would stop him he simply swung away, however he didn't know the man attempted to steal Peter's Uncle Benjamin's car and killed him during the struggle. Upon reaching home he discovered his uncle dead and tracked the killer down. Realizing he was the same person who he let away he attempted to let him go however the Bodies arrived and the crook trying to get away jumped off the ledge which he had been standing on and fell onto a bed of nails. The Bodies believed he had killed him and put up a hit for Spider-man's head.

Spider-man was a founding member of The Avengers

Retrieved from "https://marvelcomicsfanon.fandom.com/wiki/Peter_Parker_(Earth-319)?oldid=208318"
Community content is available under CC-BY-SA unless otherwise noted.