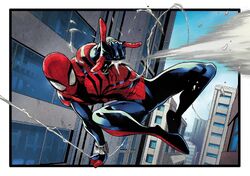 Earth-256637
Base Of Operations
The Outside
Characteristics
Gender

I know what it's like to look in the mirror and not recognize the person looking back at you. Or worse yet, you see them and you know just how much you would give to be anyone else.

Peter Parker became Spider-Man at the age of 15 after being bitten by a genetically modified spider. After spending years as the vigilante Spider-Man, he discovered that his DNA had been stolen and harvested by his arch-enemy, the Green Goblin. A conspiracy led Peter to believe that he had been the clone all along, and that the person who had adopted the name Ben Reilly was the real Peter Parker all along. Taking this devastating news as the truth, Peter left his fiance, Mary Jane Watson to dedicate his life to being Spider-Man. Mary Jane and Ben moved out of New York and left Peter to be alone, driving him deeper into his self-hating hole, which resulted in his methods becoming much more extreme. Things only got worse when Peter discovered that he was indeed the original and Ben was the clone. However, he was too late to relay that information, as the Green Goblin had already murdered both Ben and Mary Jane. Going nearly insane, Spider-Man murdered the Green Goblin during their confrontation in Times Square, turning him into a wanted criminal.

Spider-Man was then recruited into the Outsiders under the threat that if he returned to his home world his identity would be outed and he'd almost instantly be arrested and tried by S.H.I.E.L.D.

Spider-Man had a rocky relationship with the other Outsiders due to his extreme method of doing things, but made amends in the end on a mission in a reality where Apocalypse was on track to enslave the whole world by sacrificing himself in the Sphinx with Apocalypse while it was destroyed from the inside by a blackhole grenade.

Retrieved from "https://marvelcomicsfanon.fandom.com/wiki/Peter_Parker_(Earth-256637)?oldid=244589"
Community content is available under CC-BY-SA unless otherwise noted.