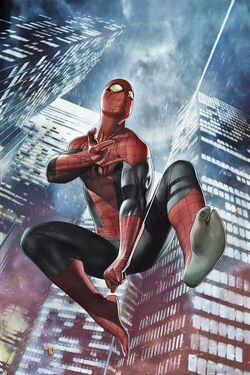 Peter was born in 1996 to Scientists Richard and Mary Parker, when Peter was 6 his parents left him in the care of Richards brother Ben and his wife May because of a business trip that they never returned from.

Peter now 16 is being beaten up along with his friend Harry Osborn by Flash Thompson and his gang when the science teacher Andrew Forson saves them. Harry walks off but Peter is asked to stay Andrew tells him that he has been nominated as Assistant Science Teacher and will help on the trip to Oscorp. The next day Peter is given his lunch by Aunt May and leaves for the bus, he gets on and walks towards Harry but MJ asks him to sit next to her as they've known each other since they were 6 and haven't really talked. Peter tells her about his nomination of Assistant Science Teacher to which she congratulates him.

They arrive at Oscorp where they are greeted by Otto Octavius, Peter is looking around when he sees Norman Osborn and a Shady Man go upstairs. Peter follows them but hides when he heres Norman say the name Richard Parker, Peter gets closer but is found by a Guard who chases him Peter runs into a room when he turns around and sees his class on the other side of a sheet of glass.

Peter bangs on the glass when his teacher tells him to stay calm as he is in the Poisonous Spider Exhibit. Peter is then bitten and collapses. Peter woke up 2 days later and looked in the mirror seeing that his muscles had built. Peter went to wash his face and rip of the tank discovering Super strength. Peter was at School when he saw Flash bullying Harry walking towards Flash Peter tripped launched a students lunch at Flash, Flash then told him he would have revenge.

One day Peter is walking home from school when Uncle Ben picked him and the two drove home, Peter asked Uncle Ben to buy him some sweets. Peter waited as Uncle Ben bought them when he heard a gunshot. Peter ran towards the shop and found his Uncle dead. Peter saw a man running away, Peter begins to chase after the man while the shopkeeper calls the police.

Spider Physiology: After being bitten by a radioactive spider, Peter Parker became an inhuman himself, gaining the proportionate powers of a spider; superhuman strength, speed, agility, stamina, senses, durability, regeneration, balance, and sense of equilibrium. He can stick to any surface, no matter how rough or slippery and a "spider-sense" that alerts of danger.

Equipment: Web-Shooters: Using his Genius Intellect Peter created a strong adhesive webbing to replica a spiders web. Peter then inserted them into two gauntlet type machines that shot out his web. These would later become Spider-Mans primary weapon.
Transportation: Spider-Man's main form of transportation is "web slinging" with the aid of his spider-webs. Spider-Man was able to keep pace with Captain Marvel at his best speed, surprising the Kree warrior, although Spidey mentioned it was mostly due to his practice with web slinging over his career.
Weapons: None known.

Retrieved from "https://marvelcomicsfanon.fandom.com/wiki/Peter_Parker_(Earth-2226)?oldid=255697"
Community content is available under CC-BY-SA unless otherwise noted.