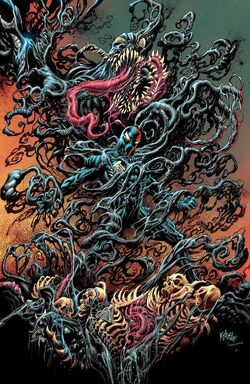 Brown
Unusual Features
Small hairs on his hands and feet that allow him to adhere to walls and most surfaces, can conduct organic webbing; putrified/decaying flesh as a Festering Dreamer
Status
Citizenship

Single
Occupation
Former photographer at Daily Bugle (part-timer)
Education
Midtown High School, Empire State University
Origin
Origin
When high school bookworm Peter Parker was bitten by a Radioactive Spider during a science experiment, he soon found out that he had gained the proportionate powers of an arachnid. In a turn of events, Peter soon discovered that with great power comes great responsibility when his uncle died at the hands of a mugger Peter could have stopped earlier. Human mutate, infected with the Nightmare's Dream.
Place of Birth
Queens, New York City, New York
First appearance
Modern Comics:
Fear Incarnate
Vol 1 1

I can still be your friendly neighborhrrrkkk... Spider-Man... Hrrrkkk... Just feed me your flesh and bone so I can be myhrrrkkk again, alright?

As a result of a radioactive spider bite, genius but socially-awkward high school student Peter Benjamin Parker developed powers and abilities similar to that of a spider. After Peter's selfish and egocentric personality as the wrestler Masked Marvel had unexpectedly caused in the death of his beloved Uncle Ben, he finally decided to use his powers for good, in which Peter lived up to Uncle Ben's philosophy that was "with great power there must also come great responsibility," and thus he became the superhero known as Spider-Man for years.

On the day the Festering Sickness plagued New York City, Spider-Man was currently trying to fix his personal quarrel with his on-again, off-again lover that was vigilante Black Cat by planning to ask her out on date with him as Peter Parker and her as Felicia Hardy respectively, hopefully later that night. However, the two vigilantes had to set their plans and differences aside for a moment after they were quickly contacted by Daredevil and the Defenders, who recently spotted the Avengers having an altercation with each other outside the Avengers Tower, most notably the Hulk who began to act strange as he suddenly attacked the nearby civilians while his teammates Hawkeye and Thor tried their best to knock him out and have him sedated, only to little avail.

Thankfully, Spider-Man and the Defenders followed their heroic instincts and charged at the scene to help their neighborhood allies, a crucial contribution that got the Avengers to restrain the berserk of the Green Goliath. Unfortunate for the joint alliance who celebrated far too early, their efforts were proven to be short-lived when the weakened Hulk manages to bite off the forearm of Hawkeye, sending the Avenger to scream in great agony, both infecting him with whatever viral pathogen that the Hulk was carrying and giving the latter an opportunity to smash his way out as he continued his mayhem across Manhattan wherein his habits rapidly changed from simply infecting countless of bystanders, to tearing and consuming the fleshes of the living with his bare hands. The Defenders could only watch in horror witnessing their allies slowly and irreversibly into instinctive cannibals who constantly screech and wallow in hysteria, screaming that their nightmares never end unless they spread it onto others.

The rest, leaving only Spider-Man, Black Cat, and the surviving New York heroes to their own devices in order to lead a group of surviving civilians make it through the mayhem that was ruining their once peaceful neighborhood. As the 24th hour reaches since the of New York, all of the boroughs of New York City became infested with the Festering Sickness and after that insurmountable feat, no opposing heroic force nor divine intervention could ever stop it from spreading even further into the rest of the state, and the entire country by the following week. From his Aunt May to his notable best friends Mary Jane Watson and Harry Osborn, Peter lost almost every one he knew and love since no one was able to run away from the Sickness as it is now everywhere.

Even the web-slinger himself would not be so lucky, and during their search for the Fantastic Four inside an abandoned Baxter Building, in hopes that there would be a cure to develop, Spider-Man's spider-sense made him realize they were too late. At the midst of realization, the slinger and his surviving teammates were attacked by an infected Thing and a horde of infected Baxter employees, whom the former mocked the living heroes that they were abandoned by Mister Fantastic and Invisible Woman, revealing that they've already left into the safety on other side of the Baxter portal before closing it for good. Most of the heroes were either hopelessly torn apart or turned into one of them as a "Festering Dreamer," but Spider-Man and Black Cat had enough time think of a way out by using a teleportation device from Baxter. Spider-Man and the survivors then formed a hypothesis whether the pathogen may be part mystical due to how the infected seemed to appear somewhat possessed by something that's not of the earthy realm. Because of this thought, Spider-Man thought of the only acquaintance he knew is related to such affairs: Doctor Strange.

The web-slinger was ready to lead the people into safety setting their course to the New York Sanctum after setting the coordinates to Strange's sanctuary, but what he didn't expect came lunging at him in the form of Venom, who sank his mostly canine teeth into his shoulder, much to Black Cat and the survivor's dread. However, despite this abrupt ordeal, the web-slinger manages to fight his zombified-like nemesis long enough to set the teleportation device on a one way trip. With his one last breath, the weakened Spider-Man professed his love and concern to the heartbroken Felicia, one last time, by telling her to stay safe and strong before using the teleportation device to banish her and the other survivors from the area, arriving outside the Sanctum wherein they were eventually saved by the Masters of the Mystic Arts after welcoming them inside their haven. Back in Baxter, Spider-Man immediately destroyed the device moments before succumbing into the major symptoms of the infection, ensuring the safety of both his loved one and the lives of those he had guided. Ever since becoming taken over by the Festering Sickness, the now ravenous and cannibalistic yet just as witty hero joined the rest of the Festering Dreamers in spreading fear onto the living with the Sickness.

Retrieved from "https://marvelcomicsfanon.fandom.com/wiki/Peter_Parker_(Earth-21410)?oldid=268701"
Community content is available under CC-BY-SA unless otherwise noted.