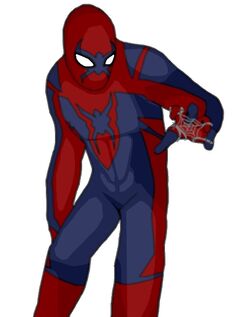 Peter was your normal high school student, with excellent scores; in school exams, and the ladies. Unfortunately, his parents got murdered, and he had to stay in his uncle's house. Peter's uncle was a former scientist who had interest in the nature of spiders. One day, Peter snuck inside his uncle's lab, and with no warning, accidentally toppled over a jar of spiders. The spiders escaped. Some of the spiders fell to the ground, and some ran over a weird radioactive mixture. One of those spiders crawled on Peter, and bit him.

Peter was unaware of his new abilities. He has to attend after-class boxing lessons, which he wasn't really in to, but was forced to by uncle Ben so that he could learn self-defense. His rival, Flash Thompson, was also there. He was beaten multiple times, but today was different. He was able to make a few punches, and actually beated up Flash. Peter felt weird after boxing lessons. He eventually fainted in on their front porch.

Peter noticed that after every day, he kept being stronger and stronger. He decided to find out what was going on, and went to his uncle's lab once more. He remembered that spider that bit him, and then took his blood pressure. It was severely high, but he didn't tell Uncle Ben or Aunt May. Instead, he tried to slice his wrist and took a blood sample. His blood was unidentified, and had multiple traces of radioactive juice. He found out that he was radioactive, and that he had enhanced strength and durability.

With these new found powers, Peter became Spider-Man. After fighting some muggers down the street, he went back home, still wearing the Spider costume, hoping that uncle Ben woudn't notice. He came back, and some criminals were ranging their guns at uncle Ben. Peter tried to save him, but failed, feeling guilty about his uncle's death. Peter needed some extra cash to take care of aunt May's health, so he signed up as a photographer at the Daily Bugle, with their cranky boss, J. Jonah Jameson. Peter met Gwen Stacy, who also worked at the bugle, who was approximately Peter's age, and developed a crush on her.

Peter encountered Jessica Drew, who was a Hydra agent at that time. Jessica eventually wounded Peter, but he survived by the aid of S.H.I.E.L.D.

Peter was fighting Mysterio in the streets of New York, before being spotted by the Future Four, and helped him. He was given a spot in the group after Victor von Doom left. He became best friends with Johnny Storm, and the two eventually became lovers.

Skilled Acrobat: Peter has been trained acrobatics by Nick Fury.

Retrieved from "https://marvelcomicsfanon.fandom.com/wiki/Peter_Parker_(Earth-1342)?oldid=143688"
Community content is available under CC-BY-SA unless otherwise noted.