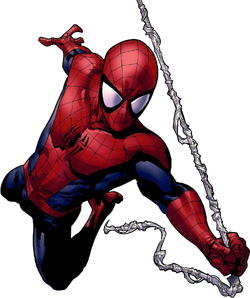 My name's Peter Parker, people call me a spaz and say I have no life, but the joke's on them. I have 2, I'm secretly Peter Parker and Spider-Man, and I spent most of my teenage years battling giant lizards, men covered in electricity, and giant goblins that shoot fireballs at me.

Peter was born sometime in 1996. His father, Richard, was a scientist. In 2001, his father and mother were forced to leave a young Peter Parker alone with his Aunt May and Uncle Ben, although Richard and Mary never returned.

11 years later, Peter was now 16 and in High School he is bullied by Flash Thompson and his friend Kenny "Kong" McFarlane. One day Peter and his science class are taken to OsCorp Industries to look at their genetics lab... until suddenly a spider bites Peter and puts him into a coma for 2 days. When Peter finally awakes, he feels great. Feeling confident enough, Peter musters up the courage to ask his best friend Mary Jane out on a date. That night they come back home and are ambushed by a group of thugs, but Peter manages to fight them all off at once and does a back flip to the wall and beats the rest of the thugs up. He takes MJ home. Later, Peter goes to bed and has an epiphany, realizing it was the spider that gave him the powers. He then went to go test out his powers and Peter found out he could spin organic webs but they would just splatter everywhere unless he placed his middle and ring fingers in his palm. The next day,Peter found an ad saying if they beat the wrestler Crusher Hogan they'd win a $3,000 prize. Peter gladly took the offer and made himself a makeshift costume and went to fight Crusher Hogan. Peter defeated him with ease and took the prize money. Later a thug stole the banker's money, but Peter let him go claiming "It's not my problem." When Peter came home he saw the police outside his house and found out his uncle had been murdered. Peter searched for the murderer and strangled him until he found out it was the guy from the arena. Peter then threw him out the window and webbed him to a pole. Weeks after Uncle Ben's funeral, Peter swore to live up to Uncle Ben's words "with great power, here must also come great responsibility". Remaking his costume, Peter took on the persona of Spider-Man, battling injustice all over New York for the next few days.

After 2 days of being Spider-Man, Mary Jane had finally figured out who Peter was, and Peter made her promise to keep it to herself and she did. Later that night Peter encountered a cat burglar known as the Black Cat. They battled each other and Spider-Man got the upper hand, webbing her to a wall and leaving her for the police. Spider-Man's earliest rivals consisted of Electro, the Lizard, Doctor Octopus, the Shocker, Mysterio, and the Rhino.

When Spider-Man was fighting Doc Ock and attempting to stop his new scheme which was to team up with his future-self and kill the original him, Doc Ock managed to open the portal. Meanwhile in the future, Sam Parker and Old Ock were battling and a portal opened, Old Ock grabbed Sam with his tentacles and threw Sam in the portal (thinking it would kill him). While Sam thought he was going to die, he would take Old Ock with him so he webs him and pulls him in the portal. They then appear in the past, with Sam being knocked into Peter and feeling sick Doc Ock gets Peter and Sam and throws them off the building, Peter then spins a web net and saves them both. Peter then asks who he is and why he is wearing a Spider-Man suit, Sam replies and unmasks himself and says "I'm Sam Parker, from the future and I'm...I'm your son" Peter believes him since he fights giant Lizards and electric people everyday so this is nothing, Peter then asks who his mother is and Sam replies Mary Jane Watson, this makes Peter happy and Sam then tells Peter that he must get back to his own time to protect his own people and be home by dinner (jokingly) this made Peter laugh due to his son being a "Wise-ass" like him. The two then go on a little adventure to find the Ock's they find them and battle them. the two then eventually knock out the Ock's, and due to Peter being smarter than Sam, Peter was able to rewire the time machine and send Sam back to the future. Sam then took Old Ock back to the future, Peter then jokingly says "Don't be late to dinner or I won't be happy", Sam then replies "See you dad...Is that weird?" and once again Peter jokingly says "Yes". Sam then runs back to Peter and hugs him saying "I'm gonna miss the cooler you, see you later old man" he then takes Old Ock back into the portal back to his own time period.

In 2017, at age 21. While on a date with his High School girlfriend, Peter Parker decided to propose to Mary Jane. Mary Jane needed time to think it over, seeing as they were both so young and were still in college. One month later, Mary Jane realized she loved Peter and decided to agree to marry him. Peter and MJ married in December, 2017.

In 2022, Mary Jane revealed to Peter she was pregnant with his child, this reminded Peter of when he encountered his son when he was 16, and remembered the name Sam. In 2023, Mary Jane gave birth to their son and Peter named him Sam as a way to secure the future.

In 2024, the newly elected president, corrupt and highly religious Republican John Damien (an expy of Donald Trump), made superheroics illigal, forcing to all members of the superhero community to resign or be arrested. After a month of being retired as Spider-Man, a 29-year-old Peter discovered his old enemy Norman Osborn had escaped custody and released the old Sinister Six members. Peter didn't know what to do until he discovered Mary Jane was kidnapped, Peter left Sam in the care of Harry Osborn and donned the Spider-Man suit for the final time to end the Sinister Six once and for all. Peter found Mary Jane, freed her and fought the Sinister Six and suffered a fatal injury that would have ended his career if he decided to continue as Spider-Man, finally Spider-Man went against his morals and killed the members of the Sinister Six. After, Peter let the world believe Spider-Man had died along with the Sinister Six, finally killing the Spider-Man persona.

12-years after, Spider-Man had "died". Peter Parker lived a normal life and continued to raise his son Sam with his wife Mary Jane Watson. In the summer of 2038, Sam's powers finally manifested and he too had obtained Spider-powers. Sam asked if he could become Spider-Man although Peter dismissed this and forbade him from doing so, although Sam disobeyed his father and became the new Spider-Man. Peter finally accepted Sam's choice and decided to help train Sam to honor the Spider-Man legacy.

After Peter learned his son Sam, had bonded with the Venom symbiote and had become a "carnage". Peter was the only person who could stop him, Peter once again becomes Spider-Man to stop Carnage and save Sam once and for all...

Sam continues as Spider-Man and Peter continues to support him. One day at home, Peter and Mary Jane are attacked by Karn, Peter dons his old Spider-Man suit. Sam arrives and Peter and Sam battle Karn while Mary Jane escapes, the two are mortally injured and are about to be killed by Karn, Spider-Britain and Old Man Spider save the two. Spider-Britain tells Spider-Man and Spider-Man II of the Inheritors and their hunt for all the Spiders and how they must protect the Scion, the Bride, the Other and the Adolescence. The Spiders locate another Spider-Team and they all begin to argue but they are then attacked by Daemos, Daemos is killed but he clones himself and returns with other Inheritors. The Spiders retreat and eventually they find out Silk has left. They then decide to scatter the important spiders and Peter is tasked with watching over Noah Kaden, Arachnid-Man and the Adolescence, before leaving Sam and Peter say their goodbyes knowing one may not be returning. Peter heads through the portal with Noah, Miles and Peter into the next dimension. Noah, Miles, Young Peter (Earth-3998) and Old Peter (Earth-1315) enter a futuristic universe and learn they are in the year 2280. Noah wonders what to do now but suddenly they are attacked by an Inheritor; Daemous. The two Peters stall Daemos while Noah and Miles escape through another portal. The two Peters are easily defeated by Daemos, as Daemos is about to kill Peter (Earth-3998), Peter (Earth-1315) tackles Daemos and orders Peter to escape, he does so and the Old Peter follows with the portal closing behind them. They have now entered the Earth-1315 universe, Old Peter takes the lead as this is home dimension. They go into hiding to hopefully stay low from the Inheritors. They relax and converse for a good five hours but this is ended when Morlun emerges and attacks the Spiders, Miles and Noah agree to stay this time and fight Morlun the four Spiders fight him but are easily knocked out. Old Peter knows they won't win but as a way to stall he attacks Morlun and tells the three younger Spiders to run. Old Peter has his head smashed in by Morlun and is knocked unconscious, Morlun absorbs Old Peter's energy, ending his life.

Spider-Man's hands and feet have the ability to manipulate the inter-atomic binding forces of matter, allowing him to form temporary molecular bonds between his body and another object. This enables him to cling to solid surfaces and scale walls simply by placing his hands on them. He also possesses a "spider-sense" which alerts him to danger. This takes the form of a tingling sensation at the base of his skull. Through experience, Spider-Man has learned how to sense differences in the various tingles he feels, determining whether a danger is potential or immediate, how intense a threat it is, what direction it is coming from, etc.

Peter is a prodigy bio-chemist, completing his father's research on adhesives at age 16. His uncle said he was "as smart as they come." He possesses an IQ of 145.

Thanks to the spider venom that courses in his veins, it makes him immune to vampire bites.

Class 10. As Spider-Man has not fully grown to adulthood, he is not as strong as his Earth-616 counterpart yet, however he is portrayed as being sufficiently strong enough to lift and throw conventional vehicles and cars, it should also be noted that he has been shown to be significantly stronger than Captain America as he overpowers him as they wrestled each other over footing. Spider-Man is currently capable of lifting 5 tons like the Ultra Spider-Woman. However, if Peter had reached adulthood it would be assumed that he would have been able to lift 10 tons like his adult Earth-616 counterpart.

Retrieved from "https://marvelcomicsfanon.fandom.com/wiki/Peter_Parker_(Earth-1315)?oldid=255693"
Community content is available under CC-BY-SA unless otherwise noted.