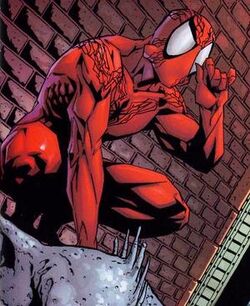 Unlike his 616 counterpart, this Peter lived with his parents and visited his Uncle Ben and Aunt May very often. Another difference between the two peters was that he was one the most athletic, popular teen in school.

While Peter was experimenting on a spider, the Venom symbiote was watching him and waiting for it's new host. But it accidentally bonded with his father, making him the new Venom. While he snuck away into the night, Peter's mutant abilities activated, just as he was bitten by the spider (a black widow). The widow's radiated poison fused with Peter's newly-changing DNA.

Peter felt sick upon returning home. He threw up on the floor, then passed out on his bed. When he woke up, he discovered his room was covered in webs, and that his saliva was poisonous. After taking a shower, Peter discovered he was even more muscular than the last time he checked. He grabbed his laptop, and found out that there were stingers that burst out from his wrist. Peter decided that he would run away, seeing himself as a freak. He got mixed up in a gang fight: they tried to kill him after he saw them murder someone. After "accidentally" killing the gang members, his father found him and went back to his wife to share his "gift" with her.

Peter decided to go back home, only to find Venom webbing his mother and his two little brothers into cocoons and venom said, "AAA, yes, here's my favorite kid, right on cue." Peter, outraged, attacked Venom, asking him who he was, and kicked him in his jaw, then accidentally punching him into the cocoons, killing their family. Peter forced Venom to peel back his face, only to discover Venom's real identity. Venom begged for him to not kill him, then sucker punched Peter in the face, knocking him down. Peter decided to make a costume, calling himself the Spider. Peter was depressed, and dyed his hair black just to reflect his inner emotions. He began web-swinging to his aunt and uncle, and while swinging near the Empire State Building, he was ambushed by Venom, and both crashed inside. Venom pinned Spider down and said he'd force some of the symbiote onto him. Spider grabbed Venom by the tongue and threw him out the window. Peter decided he would fight for good and become a super hero.

Spider thought he was just going to fight normal, non-powered crooks, but he would soon find out he was dead wrong. After beating up a gang, he was shot in the back of the head with a tranquilizer dart and kidnapped. He later awoke trapped in a force field with a now-awakening Deadpool. A man known as Reed Richards was focusing on the force field for some reason, and Spider stared at his white-templed brown hair, while a blonde dude just stood there watching, a rock-like man blocked the door looking tough, and a woman with unusual elasticity made her head stretch from a huge super-computer to the force field. Her hair was blond.

Spider tried getting out and asked Deadpool for help, but he said he wasn't yet sober from a night of heavy drinking. Spider, annoyed, used some of his toxic spit to no avail. Deadpool merely laughed and told Spider he would handle this. After one gunshot, Deadpool said that was all he could do.

After waiting a silent hour, the stretchy woman asked if they were comfortable, when she then pressed a button, and the door opened, with a man and ten armed guards with him. Both Deadpool and Spider were confused and bored, so Deadpool began cracking knock-knock jokes to keep them entertained. The man carried three bags filled with blood. These bags were revealed to have the corpses of Deadpool's wife, and Spider's Aunt May and Uncle Ben. They were outraged, and both used their power and rage to bust out of the shield, incapacitating Reed while the blonde dude's body ignited.

Spider tried taking out the rock guy, but was thrown at the fire dude, who Deadpool was shooting. The stretching man and rock guy ran away with the chick's body. The fire dude was stabbed in the chest, while the sword melted into his chest, as Spider snapped his neck. Following the bad guys to a helicopter, Deadpool and Spider bantered back and forth about MySpace and dating websites. But then black webs covered Deadpool and Spider's legs, and Venom jumped off the helicopter and asked spider if this was his new friend.

Venom ripped off Deadpool's mask, only to find he was eighteen. Deadpool swiped his mask back, and threw a grenade at Venom. Spider was surprised to see a sonic blaster in the hands of a guy named Eddie Brock, and Venom already fell onto the roof. Eddie introduced himself as a S.H.E.I.L.D agent here to arrest Venom. Peter apologized to his father, and said he let him down. Deadpool said he'd IM Spider later on MySpace, and the two parted ways.

Spider had no idea where to live, since all of his relatives were dead, and all he could do was sleep on rooftops and in old buildings. Peter looked for a job on Craigslist and found a hit-job. As much as he hated this, he was broke, and his father held all of his family's wealth. Spider was supposed to kill someone named Mac Gargan. Spider knew who he was, and saw "a nut in a scorpion suit."

After locating Mac, Spider pounced from a building and bit his neck, killing him slowly. Scorpion said something, and out of nowhere, a guy with metal claws ran towards Spider with the rock guy. Scorpion, the rock guy, and the man with claws ganged up on Spider and beat him close to death.

Spider was left for dead, and his costume was ripped apart. Venom escaped and found his son beaten, and thought that this was the perfect time for him to "share the gift" with his son. But Venom didn't know that he left a smaller, stronger gift in a villain that Spider left in a S.H.I.E.L.D. prison, who happened to escape as well. Venom attacked Spider while Carnage, the new villain, attacked them both. Spider was hanging on to life until an old friend came along to even the odds.

Carnage and Venom vs. Spider and Deadpool

Deadpool shot both symbiotes and ported away with Spider. Deadpool actually teleported a few yards behind the two symbiotic villains. Spider immediately healed from his injuries, and asked if he was ready for a tough fight. Carnage interrupted and stabbed him by turning his arm into a sword.

Deadpool, however, healed and started shooting, Spider's mutant ability is revealed. He could now heal lost limbs and organs and other injuries almost as quickly as Deadpool. Venom threatened to eat Deadpool's brain if Spider didn't take his gift. Spider threw Carnage at Venom, webbed them up, threw them at a wall, and called the police. Deadpool asked what he would do next, and Spider responded that he'd keep looking for a job.

Spider kept doing hit jobs. Aiming for lower jobs, Spider kept getting paid, however, he didn't like how it felt to kill for money. He hated how his life was falling apart. Everything used to be perfect for him, and he turned into a homeless freak trying to deny it with a mask and costume. He began to think he should take his father's offer.

Carnage broke out of prison and ambushed Spider, luckily his spider sense cannot be canceled out by a symbiote, since he was never a host. So as soon as he sensed danger, he used his stingers to impale Carnage's chest,then punched him square in his jaw.

Spider saw himself getting stronger, so he decided to attack the three men who he set out to kill in hard decisions. As soon as he saw Gargan, he was surprised to see him looking like he was 68 years old. He webbed him up and demanded he tell him how he got so old, and where that rock guy and the guy with the claws were. Gargan said the two were named Thing and Wolverine, he also said Spider's poison made him age rapidly, then he dissolved into ash.

Wolverine watched the whole thing, then crossed something off a list. Spider saw this and attacked, only to be knocked out by the Thing and kidnapped.

Spider woke up and saw Wolverine polishing his claws. Then he saw the invisible guy who introduced himself as Mr. Fantastic. Sue Storm was angry with Spider for snapping her brother's neck, and wanted Mr. Fantastic to pop his head by making a large force field in it. He told her to shut up and sit down.

Spider saw and stared in horror, seeing Venom and Carnage on the walls of the base where he was taken to. Venom explained that this was a team that he was the leader of. Spider asked why he was here, and Venom answered saying he would be recruited. Spider refused, and held Sue as hostage, then busted out through a window.

Spider later went to see an old friend named Carl Miller. Spider asked him to study blood samples from the Thing, Carnage, Venom, Deadpool, and his own. Carl saw the blood's superhuman properties, and decided to mix it with a homemade super soldier serum to save himself from cancer. Of course, all of the DNA in the serum did cure his cancer, but with more unexpected results. Miller hulked out and his chemicals made his lab explode, and killed everyone in a five mile radius. Miller was believed to be dead.

Retrieved from "https://marvelcomicsfanon.fandom.com/wiki/Peter_Parker_(Earth-12)?oldid=255689"
Community content is available under CC-BY-SA unless otherwise noted.