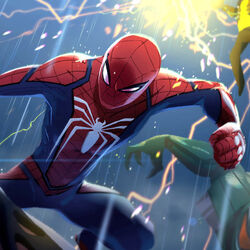 Earth-101
Base Of Operations
May Parker's House
Characteristics
Gender

The moment I put on this mask, I accept the responsibility it entails. That means everyone's life is in my hands, so if that means laying down my own to save someone else... then, I'm okay with that.

Peter Parker's parents, Richard and Mary, were both secret agents of the shadowy government organization S.H.I.E.L.D. However, when they retired to raise their son, Richard went to work at Oscorp as a head scientist studying cross species genetics, and Mary opted to stay at home with Peter. For a time, they were a happy family. But Richard and Mary's past caught up with them. They discovered Hydra was on their tail, so they left Peter with his Aunt May and Uncle Ben to go on the run.

News would later break of their deaths in a tragic plane crash, leaving Peter to be raised by his aunt and uncle. He showed early signs of a high intelligence, but Ben didn't want to give him any special treatment. This led to him feeling like something of an outcast in High School, where he was bullied by the Quarterback, Flash Thompson.

However, Peter eventually became friends with another outcast; Harry Osborn, whose father, Norman, owns Oscorp. Norman recognized Peter's name and offered to give him a tour of the labs to see some of his father's old work. He jumped at the opportunity, and while there ended up getting bit by a genetically modified spider that had been encoded with his DNA.

Peter subsequently went through a dramatic mutation that took days to completely take hold. When it was complete, he discovered he had incredible strength and agility, as well as the power to cling on to any hard surface, just like a spider. At first, Peter desired to use these new abilities to gain fame and popularity, but his arrogance soon got the better of him as he let a burglar escape his notice, claiming it wasn't his problem. That same burglar would go on to murder his Uncle Ben that very night.

After discovering the truth, Peter was devastated. He decided from then on he would only use his powers for the greater good, and became the vigilante known as Spider-Man. To earn some extra money to help support his Aunt, he picked up a job as a photographer at the Daily Bugle, which was run by J. Jonah Jameson, an outspoken critic of Spider-Man.

Peter and Harry would later go on to attend Empire State University together, where they met and became friends with Mary Jane Watson and Gwen Stacy. Peter and Flash even began to gain some common ground as Flash started to beg him for help with homework. He would also go on to earn an internship working under ESU's head scientist, Curt Connors, who was fascinated with the concept of cross species experimentation, just like Peter's father had once been.

Retrieved from "https://marvelcomicsfanon.fandom.com/wiki/Peter_Parker_(Earth-101)?oldid=250676"
Community content is available under CC-BY-SA unless otherwise noted.