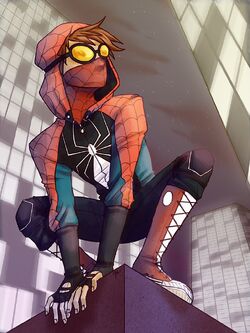 Becoming Spider-Man was the last thing I ever wanted to do. But after Peter... I did what I had to.

Ben Reilly is a perfect copy of Spider-Man, created by his arch-enemy, Norman Osborn. Ben was the final clone, following the experiments of Kaine, Scorpion, and Spider-Slayer. Horrified by his own existence, he went on the run and renamed himself Ben Reilly, trying to distance himself from Peter Parker, not wanting to harm him. However, he was eventually dragged back into his life when the other clones tried to kill him. Ben and Peter actually ended up forming a brotherly relationship, and Ben even became a hero himself, called the Scarlet Spider.

After Peter's death while fighting against the rule of Apocalypse, Ben was devastated. To honor his fallen brother, Ben took up the mantle of Spider-Man and joined the resistance team of heroes, the Avengers.

[[Category: In a relationship with Atara Characters]]
Retrieved from "https://marvelcomicsfanon.fandom.com/wiki/Peter_Parker_(Ben_Reilly)_(Earth-9999)?oldid=246144"
Community content is available under CC-BY-SA unless otherwise noted.