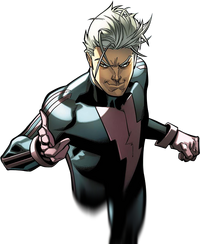 Mutant Peter Maximoff and his twin sister Wanda are members of the X-Men.

Seemingly those of the Pietro Maximoff of Earth-616.

Seemingly those of the Pietro Maximoff of Earth-616.

Peter possesses slightly superhuman strength in his upper body. His lower body is much stronger, as part of his body's adaptations for running. With his upper body he can lift (press) approximately 1000 pounds. He can leg press approximately one ton under optimal conditions.

Retrieved from "https://marvelcomicsfanon.fandom.com/wiki/Peter_Maximoff_(Earth-16160)?oldid=232044"
Community content is available under CC-BY-SA unless otherwise noted.