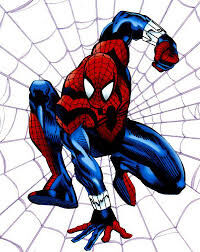 I lost two of my most important guardians in my life. I still have my mother and father, yes. But my uncle and aunt gave me more experience. They're more precious in my opinion. I do realize what's "wrong" with me. I'm a Mutant, I got powers. But I always remember what my family says. With great power, comes great responsibility.

Peter Benjamin Parker was born to two scientist parents, who were developing a way in how to cure deadly diseases around the world, with one of them being the Zika Virus. Peter's the greatest gift of God his parents had ever got. However, because of their business and dedication of life towards developing the "perfect cure", they rarely cared for Peter. And all of those, was when Peter's still in Mary Parker's womb. His parents had advised a way of the "perfect cure" by using spider DNA. At first, it was thought to be a mad idea. However, their superiors gave Rick and Mary Parker the chance to find the "perfect cure" using spider DNA. The research ended up with mutating one of the test subject spiders, irradiating it, and unknowingly, giving it the power to bestow others with powers via biting it. The first "victim" that experienced the bite, was Mary Parker, who was pregnant with Peter tha time. At night, after Mary worked overtime, the spider managed to get out of it's containment chamber, and bit Mary unexpectedly. It altered her genes, but didn't grant her powers. Instead, months later, when Peter was born, he gained the powers. Peter himself had X-Genes within him. His powers were seen by his parents at one point when he was still a baby, being somehow being able to crawl walls while he's "just doing a normal crawl initially".

Peter then ended up discovering his powers when he's still 10. He didn't realize it during his younger years. With his powers, he pretended to be a superhero named "Spider-Man", but got detention punishment in his school several times. He cleverly hid his powers, using his incredible intellect (he's a prodigy). Peter then tried to take control of his powers at the age of 15, but ended up nearly killing Eugene Thompson by webbing his face, suffocating him. Peter then escaped his family and school, realizing that his powers may mean that he's gonna be a freak in the society. He himself was already a "freak" in his younger years, being a temporary outcast and target of bullies. His mother and father tried to search for him, but failed. Then, his uncle and aunt tried to find Peter. They managed to find Peter, hiding in the sewers. And that time, it's when he got the inspiration, of "with great power, comes great responsibility". After this, Peter returned to his parents, but lived in his aunt and uncle's house, and discharged himself out of his school. He nearly graduated that time, however.

At one point, however, he met a life-changing moment. While he was walking with his uncle and aunt, they stumbled upon "certain trained gunmen", led by a weird-ass dude, trying to blow up a bank. Brock Rumlow (Crossbones), that time, was still in his HYDRA trainee times. Peter then rushed in an attempt to stop the HYDRA operatives. His uncle and aunt tried to stop him, but when Peter managed to knock out 4 HYDRA agents, Brock fired his shotgun on an unsuspecting Peter, seemingly "killing" him, then unleashed a stream of lead on his aunt and uncle. Peter, who was knocked out that time (but surviving due to his Mutant powers), woke up in the morning in a hospital. He grieved after knowing that his uncle and aunt died because of his attempt of becoming a "hero". Coincidentally, at the time when the HYDRA operatives attacked the bank, "Magneto" witnessed Peter's act. Magneto then approached Peter the next day, and offered him a place in his "school" (X-Men). Peter secretly accepted the offer, but talked to him at first about what's the school about. Then, when Peter joined the school, he saw that there are other "Mutants" like him. Peter immediately gets accepted to the school, with his parents not knowing his whereabouts. Magneto, fascinated with Peter's Mutant powers, conducted several researches, with Peter even participating in his own research. Peter later joined Magneto's X-Men, using his "past hero persona", Spider-Man.

Peter is a competent combatant, being taught by Magneto in how to fight and utilize his agility for combat effectiveness. Peter's also an accomplished and expert scientist, being a prodigy at young age.

Peter is able to lift up to 5 tons.

While Peter's "Spider-Sense" is extremely acute to the point that it is considered a "limited precognition", it can be disrupted via special type of drugs. Peter is immune to foreign drugs and diseases, but his Spider-Sense isn't invulnerable towards drugs. As such, while it's disrupted, the Spider-Sense can cause Peter's head to "bang painfully" and make him dizzy, making him vulnerable and unable to react optimally. Plus, his organic webbing isn't in infinite amount, although much. To recover the organic webbing back, it might take a few hours or minutes of "recharge", depending on how much webbing was lost.

Transportation: The X-Jet, his methods of swinging throughout certain areas using his webs.
Weapons:

Peter was 15 years old when he joined the X-Men.