Start a Wiki
"Perks of Being a Wallflower" is the ninth episode of Assemble!'s Season Five and the one hundred and twelfth episode overall.

Rockslide walked to Anole, who was walking in circles around their dorm.

-I… I am talking to this guy on Grindr and… He asked me to meet him.-

-You didn’t tell him you are a mutant?-

-Then what’s the problem?-

-I didn’t tell him that I am green and scaly, that I have a reptilian tongue and spikes and claws.-

-But he’s ok with mutants!-

-Yes, but there are different types of mutants! You have cute ones, like Northstar, or Havok… Even Iceman… And then you have the freaks… Like me.-

-And me.- Santo shrugged.

-What makes us different, Victor? You’re green, I’m grey. You’re scaly and I’m made of rocks. We’re both freaks. And people still like us! We have lots of human-looking teammates who accept us and have no problem with our appearance. You should give it a try.-

-I… I guess you’re right.- Anole pursed his lips, still not convinced.

-Guys…- Elixir knocked on the door. -Sam called in a meeting in the Danger Room.-

-Ok, we’re coming!- Vaccarro replied instantly, then looked at his best friend. -Give someone the chance to love you, Victor. You deserve it.-

Anole nodded and hugged the huge teenager. -Thank you, you’re the best friend I could’ve asked for.-

The two teenagers walked into the Danger Room, where their teammates were reunited.

-Cypher has provided us with a map, showing exactly where the Hellions are.-

-Is Professor X ok with this?- Dani Moonstar asked.

-Actually, he suggested it.- Cannonball replied. -Inspired by Douglas’ change of sides, he decided we should go on a campaign to the Hellfire Club. Show them how a real mutant team works. We need to have our teamwork on point. And remember, this isn’t a destroy ‘em all mission. This is just a campaign. Try not to be hostile unless they are hostile to us. And if ANY mutant there wants to join the School, take them with you. Be inspiring.-

-I never expected this to happen, to be honest.- Ink looked at Indra, who was next to him.

-It’s happening, Eric.- Samuel said. -Take a Blackbird with you. You can do it.-

As the New Mutants walked inside the Hellfire Club, they were booed by the other mutants. Dani clenched her fists, trying not to attack anyone. Wallflower closed her eyes, trying her hardest not to use her pheromone manipulation unconsciously. Elixir wrapped his arms around his friend, comforting her.

-Someone call the Hellions!- A teenager with pink hair yelled, pointing at the New Mutants.

-We’re not trying to pick up a fight…- Icarus muttered.

-Too bad. I am, b*tch.- The guy replied, creating illusions of himself and attacking the heroes.

-Oh, traitor!- Each of the copies chuckled at the same time. -That’s such a common name. I am Kid Omega now!-

Dani Moonstar took a step back and pulled three arrows on her bow and fired them at the illusional copies. One of them yelled in pain, as the other illusions disappeared.

-I think I found the one.- Dani smirked.

-Don’t you dare!- Josh yelled, running past his teammates and getting in front of Quire.

-Awwww… You like her?- The Hellfire Club member asked mockingly.

Foley tried to punch the telepath but the latter paralyzed him using his mental powers.

-Oh, I should!!!- The girl yelled, using her pheromone manipulation on him.

Unable to block this out, since his powers are just psychic, Kid Omega yelled in pain, freeing Elixir of his paralysis.

-Laurie…- Josh muttered, walking to her. -You saved me…-

-I guess I did…- She smiled before kissing him.

Many Hellfire Academy students were impressed by the team’s abilities.

-Should we do something?- A blonde teenager asked a fellow student whose body was made up of a bio-paraffin, who shrugged.

-Let’s give him the scare of his life.- Dani smiled, making him see a three-dimensional image of his greatest fear.

-Does anyone want to join us?!- Icarus asked, looking at the students.

No one said anything.

-You know where to find us.- Rockslide replied.

-Or you can ask the Hellions, since they broke into our School.- Indra shrugged.

Icarus turned around and muttered. -Paige.-

-They call me Husk around here. But I guess you can call me Paige, little Jay. When you tried to kill yourself after poor Julia died you told me you didn’t want to join the X-Men.-

-I didn’t…- Jay shook his head slightly. -But I’ve seen what they do. And I trust them more than I’ll ever trust you, Paige. You didn’t care about me, you just care about bringing more people into this Club. And now, yes, we’re leaving.- He said, before heading to the Blackbird.

Anole walked to the restaurant where Noam was waiting for their date. As he was about to walk inside, he saw a little girl walking to him.

-Get away from him, Jenny!- Her mother ordered, looking at the teenager repulsively.

Victor, tearing up, ran away from the restaurant door. Walking through New York’s streets, he got in the neighborhood known as Mutant Town, a minority ghetto, where mutants lived secludedly. Crime was high, Mutant Growth Hormone dealers could be seen in every corner of the impoverished, overcrowded and violent neighborhood. He wondered if that was the life he deserved, with all of the mutants who possessed physical mutations that prevented them from blending in with human society. Anole discarded this idea, since he had a family back in the X-Mansion.

Some minutes later, while walking through Washington Square Park, he spotted Noam sitting, visibly upset. Victor walked to him, feeling guilty over his sadness.

-Hey…- Noam looked up at him briefly.

-How do you know?- The human teenager widened his eyes.

-Undoubtedly.- Noam smiled. -I will take you to the next coffee shop.- He stood up and grabbed Victor’s hand, as they walked side by side.

Kid Omega pulling Wallflower to him 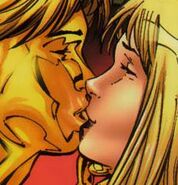 "You’re leaving already? My own brother!"

Anole in doubt
Add a photo to this gallery

Retrieved from "https://marvelcomicsfanon.fandom.com/wiki/Perks_of_Being_a_Wallflower_(A!)?oldid=135115"
Community content is available under CC-BY-SA unless otherwise noted.