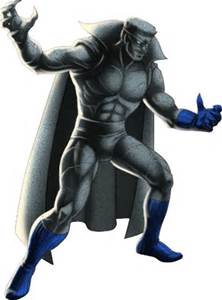 Little is known about the Grey Gargoyle's life before the formation of the Masters of Evil. It can be assumed to be similar to his mainstream counterpart.

Grey Gargoyle was among the supervillains hired by Doctor Doom to become part of his Masters of Evil. However, he was more loyal to the Mandarin, thus has followed him through his defection & failed coup d'tat. He was defeated when the Ultimate Alliance found Mandarin's new base.

Grey Gargoyle was hired by Lucia von Bardas 2 years later to plant bombs across New York as a distraction for the Alliance. Grey Gargoyle was later forced into the Thunderbolts by S.H.I.E.L.D. to fight the Anti-Registration movement led by Captain America. He was thus among the members of the Fold when it showed itself during the Prison 42 breakout.

After the Fold's defeat, Grey Gargoyle one of the villains scarred by the events months ago to the point of suicide.

Duval is an accomplished chemist, and is fluent in both French and English.

The weight of the Grey Gargoyle's stone body makes him susceptible to sinking and drowning when he reverts to his human form. His physical attributes, other than his strength and resistance to injury, are only at levels comparable to those of a typical human being. Hence, he can become fatigued fairly quickly and he has little knowledge of armed or unarmed combat.

Retrieved from "https://marvelcomicsfanon.fandom.com/wiki/Paul_Duval_(Earth-6109.2)?oldid=128886"
Community content is available under CC-BY-SA unless otherwise noted.