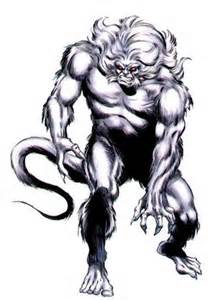 White, , Brown (formerly)
Unusual Features
As the Wendigo, Cartier was several feet taller than the average human and vastly more muscular. He was covered with snowy white fur, had a long tail, razor sharp teeth, and claws on his hands and feet. The Wendigo is unable to change back until the curse is lifted from its host.
Status
Citizenship

Little is known about Wendigo's life before the Secret Invasion. It can be assumed to be the same as his mainstream counterpart. Wendigo was one of many superhumans selected to join the Ultimate Alliance to fight the Skrulls. But upon arrival, he was administered a sedative which would keep him under wraps.

As the Wendigo, the sheer scope of his physical attributes coupled with his feral nature made Cartier a highly formidable combatant.

Although Cartier didn't age and was immune to disease and injury as the Wendigo, it was possible for him to be killed, if he were decapitated or if his heart were removed.

Retrieved from "https://marvelcomicsfanon.fandom.com/wiki/Paul_Cartier_(Earth-6109.2)?oldid=255238"
Community content is available under CC-BY-SA unless otherwise noted.