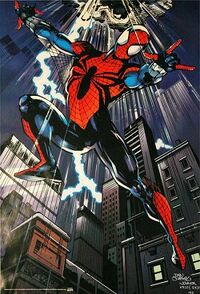 Oscorp Industries. My father used to work there. I'm going there to get to the bottom of this. They must have the answers. Sorry Mum I have to go and find out what happened to my father. Look after Sis for me.

-- Peter's letter to his family

He’s the son of Richard (Ray) and Mary Parker, brother of Petra. He grows up with his parents and takes up after his dad learning science and technology. But when he found out that sad news about what happened to his father in a lab accident, he’s sad and lives with his mother and sister, grew up with the mystery of his father’s disappearance and work hard following in his father’s footsteps.

When he travels to college on his bicycle, he parks there and goes to the building until (Eugene ruined his bicycle by crashing it with his car. (Eugene is seen dating MJ (Mary Jane Watson), (Eugene provokes Peter to make him pay, but he can’t. MJ told Eugene they need to get to class and they walk away, MJ looks back and realised bullying is wrong (thinking in her mind). Peter does the angry look (mad inside), just walks off continuing his studies.

He went to the Oscorp science trip with other students until he’s been bitten by an enhanced Spider and passed out in front of everyone. He’s in the hospital and ok health, until the next day when he’s walking down the street he feels dizzy and saw a car coming at him, thanks to his Spider Sense jumps to the wall, wall crawling, and other powers.

He realised why did it happen and find out how. Peter found his father's briefcase in his house basement, which revealed to him the Images of his father had worked for OsCorp with Dr. Curt Connors in cross-species genetics. He attempts to research spider bite symptoms, but was unable to find the spider that bit him, as it was a genetic mutation.

Before he goes testing his spider powers he got invited by MJ to the party, he decides to be there.

He’s going to pick his sister up at the same college but he asks one of his sister’s friends if they seen her but one of one asks if he’s the brother of Petra and told him where she went. They said his sister meet these strange men and take her somewhere.

He decided to go look for his sister but worried what his mum thinks, he got a call from his mum that his mum already knows because his sister’s missing stuff with her name was all over the road being found by the police. He rushed to their house and see the police officers comfort his mother and one of the officers said to him that his sister’s been kidnapped. Another officer told others and including Peter and his mother the location to where his sister being held as a hostage.

Peter realized with his powers he uses them to help, he decided to go find his sister and saves her before it’s too late. He dressed up as the Vigilante and goes to the abandon garage. He found them inside looking above, his sister, tied up and gagged, there’s about 5 gang members creepy, perverts and rapists.

He uses he Spider-Powers taking them down and using his Mechanical Web Shooters to trap them. After saving his sister, he decides to take her to safety after untied her. She wants to know who is he and can’t trust him at first but when they walk to a safe place, he revealed his identity to her showing he cares for his family. She’s shocked, hugs him and thanking him. He told her to this secret between them because he’s not ready to tell his mum yet. As long as his family’s safe he will help because he lost his father once and he doesn’t want the same problem happened to his mother and family.

After sister is safe, his uncle and his aunt came to visit and they are happy that him, mother and sister are ok after heard what happened in the news.

Peter and his uncle talk, Peter doubts himself being responsible about he could’ve done better to help his father just like he helped his sister. His uncle told him life is not perfect, with great talents you can do those things, still working hard and the motto “With Great Power there must also come Great Responsibility’.

Crimefighting as the Web-Slinger

After learning Science from his studies, he decided to use his science talents into creating them as arsenal, his costume and go to fight crime to help and getting involved because of his responsibilities. Only his sister can cover up the secret to help their mother whenever family matters happen.

Meeting with Nick Fury and SHIELD

After helping Nick Fury battling against a shape-Shifter for framing him and Nick. He's being told by Fury that he knows his father since he's a ShEILD tech helper. Also seeing his hard work stopping the criminals, he decided to train him to be better.

Patrick is becoming an lab assistant to help, getting more answers about the everything involving his father's whereabouts, Oscorp and others.

Teaming Up with all Heroes and Villains?

Danger in the family

This Spider-Man appeared alongside the Spider-Army, teaming up with Spider-UK, Spider-Girl (Petra Parker), Spyder-Knight (Peter Parker) and Spider-Girl (Penelope Parker) must find a way to defeat Morlun, Karn, and the rest of the Inheritors once and for all.

Seemingly those of Peter Parker (Earth-616)#Abilities.

This version of the character is exclusive to the continuity to the Earth-54321 and is an adaptation of Spider-Man. The original character was created by Stan Lee and Steve Ditko, first appeared in Amazing Fantasy #15 (August, 1962)

His real name is Patrick.

Unlike the Original Peter (Earth-616) he got three different names staring with the letter P.

Unlike his Earth-616 counterpart this version of Spidey got parents that didn't die but one is missing due to an accident. Also his Uncle didn't die, he's with his wife at holidays then came to visit.

I'm working on my version of an Spider-Man origin not reusing the same origin but shows examples like he got his powers from the Science Fair or Oscorp.

I decided to make this Spider-man as my version with a real family because I wanted to make something similar but different because I'm a family person and this universe is all about families not just orphans. Like other Marvel heroes and villains got families only in flashback.

Retrieved from "https://marvelcomicsfanon.fandom.com/wiki/Patrick_Parker_(Earth-54321)?oldid=255704"
Community content is available under CC-BY-SA unless otherwise noted.