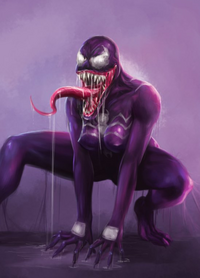 Lillian Lint was a college roommate of Donna Diego. After Anti-Venom tracked Donna down, intending to destroy her symbiote Scream, a piece of the symbiote developed into a new entity, attaching itself to Lint, calling itself Passion. As the offspring of Scream, Passion is a grandchild of the origin Venom symbiote.

Lillian went to the same college as Donna Diego, becoming her roommate in her senior year. For sometime she supported Donna support of the Life Foundation, before more of the companies darker secrets came to light. Lillian cut off contact from Donna for sometime, moving several states away. On the run from Anti-Venom, Donna fled to Lint's apartment, being the only person she could still trust.

Retrieved from "https://marvelcomicsfanon.fandom.com/wiki/Passion?oldid=221798"
Community content is available under CC-BY-SA unless otherwise noted.