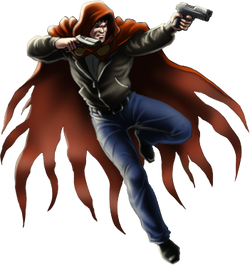 Little is known about the Hood's life before the Secret Invasion. It can be assumed to be similar to his mainstream counterpart.

At some point, the Hood started a crime syndicate from New York's supervillains. Among his ranks included Madame Masque, the Ani-Men, Armadillo, the Blackouts, the Controller, Griffin, Mentallo Mister Fear, the Purple Man, Tiger Shark, the Shocker, the Slug, the Wizard, and the Wrecking Crew.

He sent the Ani-Men to gather intel on Skrull activity from their computers after learning of a secret base underneath the San Diego Zoo. This lead the Ultimate Alliance to discovering their base in an abandoend area of Hell's Kitchen. Everyone there were taken out, but it revealed that the Slug was repelaced by a Skrull, who was given mental blocks to prevent being detected by the Hood. Hood proceeds to kill the Skrull before manging to teleport the supervillains away.

Retrieved from "https://marvelcomicsfanon.fandom.com/wiki/Parker_Robbins_(Earth-6109.2)?oldid=160637"
Community content is available under CC-BY-SA unless otherwise noted.