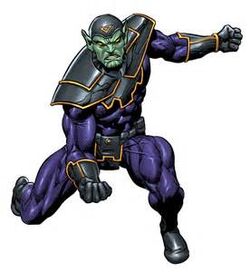 Little is known about Paibok's life before Galactus's attack on Skrullos. It can be assumed to be similar to his mainstream counterpart.

When Galactus attacked the Skrullos, the Ultimate Alliance arrived to steal a muonic inducer from his devices. The Skrull Empress offered to share valuable information with the heroes in exchange for them securing the release of her shuttle craft, and offered the services of the Power-Skrull and Super-Skrull on that mission. Once her shuttle craft was free to depart, however, the Empress revealed she had lied about providing further help, and ordered Paibok and Kl'rt to eliminate the heroes, but the two were defeated anyway.

Retrieved from "https://marvelcomicsfanon.fandom.com/wiki/Paibok_(Earth-6109.2)?oldid=158222"
Community content is available under CC-BY-SA unless otherwise noted.