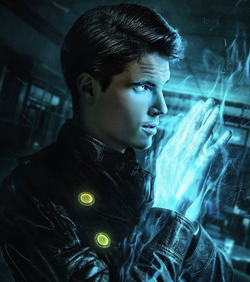 You think you understand physics? You don't even understand yourself.

Owen Reece was a molecular physicist studying how to alter matter from one state to another. His studies eventually brought him into contact with an experimental crystal called Terrigen, which exposed him to the process of Terrigenesis. When Owen emerged, he discovered he had been evolved into his true Inhuman state, capable of altering matter with his mind.

Initially, Owen grew mad with power, believing himself to be a god. However, after intervention from both S.H.I.E.L.D. and the Fantastic Four, he decided to go into hiding. He was eventually discovered by the ancient Inhuman Hive, who swayed him into joining his Inhuman Revolution Front. He proved to be a very valuable asset for Hive's cause, managing to stay by his side until the very end.

After his death, Molecule Man's mind was cleared, and he turned himself in. He was able to explain his thought process, and how he only ever wanted to do good, but felt he had been corrupted by the actions of Hive. He was then offered an out by Reed Richards, who proposed for Molecule Man to join the Future Foundation as a last ditch effort to save the universe, should the need ever arise. Desperate to prove himself, he agreed, and took up residence in the Baxter Building.

Retrieved from "https://marvelcomicsfanon.fandom.com/wiki/Owen_Reece_(Earth-101)?oldid=250584"
Community content is available under CC-BY-SA unless otherwise noted.