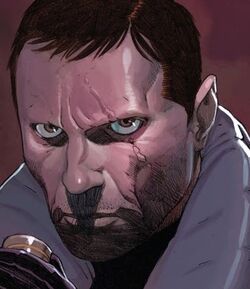 Long have I waited for this day. The day Hydra is born again... Now, I am Hydra's Supreme...

Otto Vermis was born around the late 1970s to a wealthy and publicly-authoritative family who came from a lineage of secret Hydra loyalists, particularly the ones who worshiped the deity-like Inhuman Hive, though they were also flexible enough to abide by the modern change that was revolutionized by the Red Skull during World War II. Exclusively raised, taught, and strictly trained in a family living under the guidance of its oath and ideologies, Vermis eventually became the area commander of a splinter faction of Hydra secretly operating in various locations across Europe after it has resurfaced thanks to the grand salvation that was brought by Arnim Zola's act of salvation. In the following decades, Otto and his small yet efficient faction have heavily participated in Hydra's orchestrate crises and worldwide; establishing a clandestine network of operatives engaged in political engineering and scientific research, mainly in western Europe.

Initially remembered as a nobody and a "valueless, disposable sheep" within the ranks of Hydra by his relatives, Otto was able to prove them wrong by slowly building himself a respectable name as the scientist who ran and sanctioned a training program which involved "recruiting" orphaned young children whose families in Europe were kept under Hydra's watchlist, including Jessica Drew, into being their future agents of Hydra through the several effective brainwashing methods invented by Hydra since it survived World War II. Unfortunately, when Drew had reached her early adult years, she had fully regained most of her memories and reformed thanks to the help of the web-slinging superhero Spider-Man who helped and encourage her to fight back and build her own path as the superhero vigilante Spider-Woman.

However, other than this morbid achievement, the intellectually-gifted Vermis was also known for his obsession in genetics, especially cloning as he believes that his creations, his subservient "children of God," would take over Hydra in due time once it falls at the hands of their enemies. Because of his reputable and improving progress experimenting both on Hydra agents and his clones who were powered with various varieties of the Super-Soldier Serum, Otto himself believed he would become Hydra Supreme just like what the Red Skull once was, though he was merely living a saddening delusion at the time knowing the fact that he was far from becoming a head of Hydra other than the very base that he was designated to rule from the beginning, at least not until he gets the opportunity to change his limiting fate by the 2010s, during the Hydra Uprising when he had to deal with the European Defense Initiative, S.H.I.E.L.D.'s European counterpart.

Retrieved from "https://marvelcomicsfanon.fandom.com/wiki/Otto_Vermis_(Earth-61615)?oldid=268055"
Community content is available under CC-BY-SA unless otherwise noted.