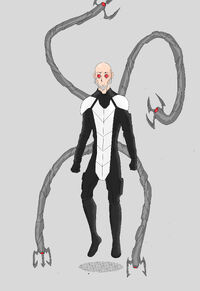 Otto Octavius was raised in an oppressive household, with an overprotective mother, and a harsh, abusive father. His mother encouraged the young Otto, already a good student, to push himself in school, in the hopes that he would have a better life. Becoming obsessed with schoolwork after his mother's death, Otto applied himself even harder to his studies in science. He graduated and got work with an engineering firm, soon becoming a respected nuclear physicist and research consultant.

Otto Octavius helped run a science summer camp where Ben Parker took a young Peter Parker. Octavius helped mentor Peter, who was like him and smart but picked on by the other children.

One day, Octavius hypothesized an idea that energy content of fusion energy can be harnessed in battery format; having sought funding from Lisa Benson's Foundation, created a fusion experiment; to safely manipulate hazardous substances he crafted a harness using four metal tentacles attached to a harness that used neural sensors to read his thoughts and control his arms. Eventually Benson's patience wore thin and she terminated funding. Forced to work in substandard laboratory conditions without essential safeguards; Otto spent months in isolation trying to perfect his research. When the experiment exploded, Octavius' arms were permanently fused on his back due to being bombarded by nuclear energy and extreme heat. The radiation simultaneously caused mutations in his brain, allowing him to have direct control over the arms through telepathy.

Octavius the awoke in the hospital, and realized his tentacle harness has fused with his body and can completely control them only with his mind. He also felt "stronger then ever" and sees himself as "superior" than anyone he knows. He then escapes the hospital, and decided his first order of business was to take revenge on all those who mocked him and has deemed his enemies. Embracing the name Doctor Octopus.

Octavius kidnapped his father and Maria Benson for ransom from Maria's mother, who did not have patience to fund Ock's experiments before he was a villain, and has taken them to an abandoned warehouse. He then plans to kill of them to show the world he can truly defeat his enemies. Upon which his confrontation with Spider-Man forced him to kidnap J. Jonah Jameson as well for additional fee; he was subsequently defeated by Spider-Man manages to save the two hostages Maria Benson and Jameson. Spider-Man unafortunalty failed to save his father however as he was murdered by his son Otto before Spider-Man could save him.

Octopus was sent to prison, possibly Ryker's Island, where his arms were trapped in each of the room's four corners and he could only sit in the middle.

While still in prison, Otto Octavius was visited by a man calling himself The Gentleman and was listed as a potential candidate for a "Special Project" that the Kingpin was running. When asked how many men he needed for the the project, Kingpin tells him to keep it at a minimal of six.

Without the use of his artificial tentacles, Otto possessed the normal human strength of a man of his age, height, and build who engages in moderate regular exercises. With his artificial tentacles, Otto is capable of climbing entire buildings, destroy concrete and metal structures without effort, and go one-to-one against Spider-Man, wich possesses superhuman strength.

His eyes damaged in the accident that gave him his powers are very sensitive to light, meaning he has to wear special glasses to protect them.

In a freak laboratory accident, volatile liquids exploded - bombarding the scientist with radiation. The substances left him capable of mentally controlling the arms, but the accident also caused irreversible brain damage - transforming the respected scientist into a megalomaniacal superhuman criminal. The tentacles allow for multitasking and have a considerable amount of superhuman strength.

Transportation: He moves around quickly by walking on his four tentacles (although he has been shown to require only two to walk on).
Weapons: Doctor Octopus' Tentacles: His tentacles, which allow him to easily break/bend stronger metals, and even Spider-Man's webbing. They also have spikes that come from the 'eyes'. When the claws are closed, they can fold up to reveal small claws to hold smaller and more delicate objects. They are resistant to heat and magnetism.

This version of the character is exclusive to the continuity of Marvel Ultiverse and is an adaptation of Otto Octavius/Doc Ock. The original character was created by Stan Lee and Steve Ditko. His first appearance was in Amazing Spider-Man #3 (July, 1963)

Retrieved from "https://marvelcomicsfanon.fandom.com/wiki/Otto_Octavius_(Earth-981)?oldid=254781"
Community content is available under CC-BY-SA unless otherwise noted.