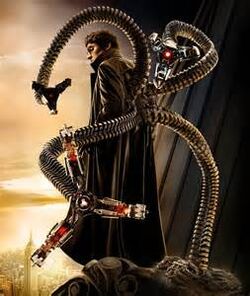 Single
Occupation
Scientist, criminal mastermind; formerly atomic researcher
Education
Ph.D. in Nuclear physics
Origin
Origin
Otto Octavius created mechanical tentacles to aid him with his nuclear work. After a lab explosion left him hospitalized, Otto awoke to find himself able to telepathically control them, Otto realized that with his new ability, and his already great intellect, he could be the best there is.
Place of Birth
Schenectady, New York
Creators

Little is known about Doctor Octopus's life before creating the latest Sinister Six. It can be assumed to be similar to his mainstream counterpart.

Retrieved from "https://marvelcomicsfanon.fandom.com/wiki/Otto_Octavius_(Earth-6109.2)?oldid=156119"
Community content is available under CC-BY-SA unless otherwise noted.