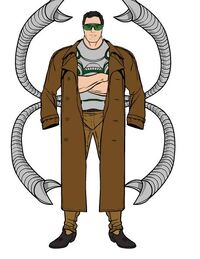 Otto Octavius lived a hard life. He was born to a lower class family, had an abusive father, a coddling mother, and faced bullying from his peers for being overweight and a nerd. However he from an early age was discovered to have a brilliant mind and later in life that helped him get a scholarship into college. He developed a deeply arrogant personality, and convinced himself that his bullies were merely jealous or just didn't understand him, but in spite of that cockiness he still had a timid personality when it came to dealing with others. In college he met a fellow brilliant mind in Norman Osborn when they took a course together under the up-and coming professor Miles Warren. The two developed something of a friendship, and decided to go into business together. Since Norman put up the bulk of the financing, they called their company Osborn Chemical aka OsCorp. He was too meek to argue the point, but Octavius considered that an insult to him.

The two managed to build the business into a wildly successful enterprise. Becoming one of the top suppliers and military contractors to the country. And Norman was the one who would soak up the praise and attention whilst he was viewed as little more than his lab assistant even when he took the bulk of the scientific work when Norman became focused on running the business end of things.

Otto wound up living with his mother pretty far into his adult life, and her psychological grip over her son never let up. Things coming to ahead when Otto fell in love with a coworker named Mary Alice Anders who showed him genuine respect and compassion. A friendship formed and they'd start dating. When he planned on proposing however his mother denounced it. Stating that she wasn't worthy of her brilliant son. Otto didn't fight back and complied. Which only made his attitude and relationship with his co-workers all the worse.

Peter Parker however, who looked closely and carefully into scientific studies actually acknowledged Octavius' contributions and held an admiration for him. Something he'd learn when Peter Parker was assigned to him when he got the opportunity to visit OsCorp. Norman having known Peter because he was the best friend of his son Harry had developed an interest in him and gave him the opportunity to spend some time seeing the day to day workings of the company. He assigned him to Otto's care in the lab which Octavius was initially displeased with. However over time he came to see more and even much of himself in the young man and they developed a bond. Otto beginning to fill the void left by Uncle Ben's death.

He'd also eventually meet May Parker when she came to pick up Peter from OsCorp one evening. The two hit it off well and after a few encounters Otto would ask her out to dinner.

Retrieved from "https://marvelcomicsfanon.fandom.com/wiki/Otto_Octavius_(Earth-515)?oldid=236200"
Community content is available under CC-BY-SA unless otherwise noted.