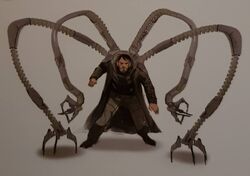 Earth-12332198
Base Of Operations
The Outside
Characteristics
Gender

Am I the only one on this team with brain cells?

After working at Oscorp for years, Otto was terminated by his boss, Norman, just as he was on the cusp of a breakthrough on his prosthetics technology. Desperate, Otto uses himself as a test subject. However, during the bonding ceremony to his arms, the technology malfunctioned and fried Otto's brain, driving him absolutely insane. He then went on a murderous rage to kill Norman Osborn, but was met with opposition from Spider-Man. Otto would eventually go on to recruit Spider-Man's greatest enemies, including Kraven the Hunter, Electro, Scorpion, Sandman, Rhino, and Vulture. Working together, they succeeded in killing both Osborn and Spider-Man, and soon their ambitions grew beyond revenge. Setting out against the remaining heroes of the world, the Sinister Seven began pillaging the United States of America in a quest for power.

Doctor Octopus was later recruited into the Renegades by The Outsider under the promise that if he returned to his home reality, the Sinister Seven would begin to get overpowered, and the other members would betray Doc Ock for leniency. Disgusted with this possibility, he was happy to abandon his team for the Renegades. He instantly tried to take control of the team, and very quickly fell into conflict with the other members. After serving on several missions, Doc Ock met his end against an alternate version of Magneto, who skewered him with his own tentacles.

Retrieved from "https://marvelcomicsfanon.fandom.com/wiki/Otto_Octavius_(Earth-12332198)?oldid=244583"
Community content is available under CC-BY-SA unless otherwise noted.