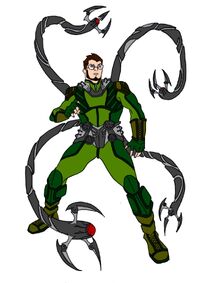 Otto Octavius was a genius working for Oscorp in nuclear physics. Octavius was also partly responsible for creating the spider that bit Spider-Man.

One night, Octavius was working on a project involving nuclear energy although it was sabotaged and went awry causing it to explode and almost kill Octavius, Spider-Man ended up saving Octavius and dropped him off at a hospital.

He woke up the next day panicking and mentally unstable from the nuclear blast, he was then told by a surgeon that his harness was fused to his spine, this enraged Octavius. Believing himself to be a freak, he suffered a mental breakdown and begins wreaking havoc at the hospital. Spider-Man arrives to try and talk him down although Octavius attacked Spider-Man and managed to escape from the hospital.

Octavius donned a jumpsuit and came to the conclusion that Osborn is the reason he is now a freak and so he went to Oscorp to enact his revenge and kill Octavius, although Spider-Man arrived once again and stopped him and apprehended him. Octavius was later incarcerated at the Triskelion by Nick Fury and S.H.I.E.L.D..

Tentacles: Doctor Octopus' superhuman abilities derive from the four mentally-controlled, electronically-powered, telescoping, prehensile titanium-steel tentacles attached to a stainless steel harness encircling his body from lower chest to waist. Each tentacle, approximately five inches in diameter, terminates in three single-jointed pincers. The pincers are able to rotate in relation to the arm for 360 degrees, in a screwdriver-like twisting motion. Each tentacle segment contains four high-efficiency electric motors equipped with a clutched, helical-gear train, independently mounted on frictionless gimbals and housed in four thin, overlapping layers of titanium-niobium steel. The titanium-steel alloy is light, has high-tensile strength, a high melting point, and high thin-wall rigidity. The motors get their power from a small nuclear-powered thermo-electric generator, which can provide several hundred watts per hour for up to five years before needing to replace its U-239 core. The tentacles have been modified since the time of the original accident to include high-efficiency battery packs (enabling movement when cut off from the central power source) and individual micro-circuit control modules (enabling each arm to perform certain pre-programmed actions when Octopus loses conscious control). In the event that Octopus loses consciousness, the control module of each arm has enough pre-programmed conditional responses in its memory chip to enable it to perform a relatively complex sequence of actions, such as saving his life. The trauma of his arm or arms being separated from the harness causes a period of disorientation in which his arms flail about uncontrollably until the pre-programming takes over.

Telescoping: Each tentacle is approximately six feet long at full contraction, but can extend to a maximum of 24 feet in length.

High-Wind Generation: The tentacles can generate 50 mile per hour winds if spun like a giant fan.

Sensation Feeling: Although there are no nerve endings throughout the length of his artificial arms, Octopus can "feel" basic sensations with them. As a result of the mutagenic changes from exposure to radiation during the accident, electrical connections have been made from his chest harness to his spine. Thus, Doctor Octopus can mentally perceive "tactile" sensations by feeling the amount of electrical resistance that the pincer's electric motors feel when the pincers grasp an object.

Genius Intelligence: Otto Octavius is a mutlti-discipline scientist with expertise in various fields of science.

Engineering: Doctor Octopus is a brilliant engineer and inventor.

Retrieved from "https://marvelcomicsfanon.fandom.com/wiki/Otto_Octavius_(Earth-1111)?oldid=163029"
Community content is available under CC-BY-SA unless otherwise noted.