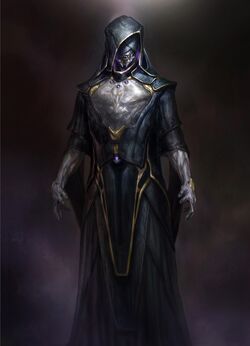 Betrayer of the Order,
Master of the Scrier
Identity

He was such a loyal servant... By the time he gave up his own allegiance to join me, I knew he would stay by my side... Unfortunately, his loyalty was also the seed of his own demise... It was foolish, yet it was so brave of him...

The Other was an Opeñian humanoid, who passionately served as a loyal high priest and lecturer of the Order of the Evolutionary Ascension, a radical religious and scientific-related organization, from tens of thousands of years ago to the early days of the Modern Era, approximately at some point during the late of 1980s (measured by the planet Earth's Gregorian calendar). Due to his natural immortality, he gradually gained trust and spread influence over most of the Order's greatest of followers throughout his lifetime career, subsequently creating a subsidiary group dedicated to his philosophical teachings known as the Scrier of the Order. This fact also made him one of the five oldest figures the Order has ever recorded, although the Other himself started to feel a lack of interest and seemingly experience an anhedonic life, believing that he had been in the Order for far too long as he eventually seeks for a new purpose, a new reason to live in the vast universe, something he and other people believes to be filled with infinite opportunities and endless possibilities.

As a result of the Opeñians' eventual failure to protect half of their people from the forces of Thanos, the Opeñian Union was almost purged by the Mad Titan, although the Order was more unfortunate, as it was subsequently dismantled by Thanos himself. Along with the Order's core destruction on Opeña 3, most of them would unfortunately never receive the news that all their established settlements across the intergalactic community were completely overthrown by the united alliances, leaving the last and only facility of the Order to die out on its home planet. The final factor of their destruction was due to the actions of the Other, who willingly decided to betray his organization and switch allegiances by secretly handing Thanos the Mind Stone and the Scepter, seeing a vision from the stone that the Order was destined to meet its end, and another that foretells the eventual rebirth of all their ideologies on a benevolent but also chaotic planet called Earth, in a form of a human mutate who would continue their legacy, only a year or two from the Order's destruction.

For the next several years, the Other has finally found his new purpose in life, much to his content as the Mad Titan's servant, to which he has now pleasantly served as an envoy between his new master that was Thanos, and during the Modern Era, he had to deal with Thanos' new deadly client and warrior, the Asgardian Loki Laufeyson, arranging a vast army of Chitauri for Loki as part of their deal and giving him the great Scepter, containing the powerful Mind Stone. Loki needed to establish a beachhead by opening a stable portal from Earth to the assembled Chitauri assault force and in exchange give them the Tesseract, or at least a significant variety of it, containing the Infinity ingot that was the Space Stone.

While communicating telepathically from Sanctuary through the Scepter, the Other was angered and threatened Loki when he pridefully questioned whether the Chitauri were as formidable as they claimed. The Other felt too much disappointment in Loki's selfish limited vision in ruling just Earth, stating that the Tesseract would grant them access to ruling the entire universe itself. He warned the Asgardian god of mischief that if he failed to provide the Tesseract and deliver it to his loyal master, they would send him massive forces just to hunt him down across the entire cosmos if he ever tries to escape his most probable failure on his important cosmic mission.

Following the aftermath of Loki's failed Chitauri Invasion, the Other still served Thanos and held frequent arguments with his new warrior, Ronan the Accuser regarding the mission for the Orb until, in a fit of rage, Ronan apparently killed the Other with his Cosmi-Rod by snapping his neck, or so he thought. At first, Thanos seems like he didn't care for the Other, showing little regard for his servant's death, although in reality, the Other was later revealed to have survived the ordeal of Ronan, showing that his natural physiology was outstandingly flexible in a superhuman scale, not even snapping his own neck would take his life, or even give him extreme pain, with the Other remarking that the pain level of the snapping was just the same as a pinch for him, and that the fact he had to take his neck back into place was even more painful. After Ronan left the Sanctuary to search the Orb once more, the Other stood from the ground and reluctantly twists his neck back into place once more, feeling embarassed and irritated to be suddenly humiliated by the Accuser in front of his own master.

In order to start his search for the Infinity Stones, Thanos and a portion of his starfleet mercilessly attacks Xandar, including the loyal assistance of the Other, decimating half of its population as he retrieves the Power Stone (contained inside the Orb) from the Nova Corps. Despite the hard efforts of the Guardians of Galaxy and the Ravagers to stop Thanos and his forces' assault on the planet, Thanos was still proven to be the victor, and was already on his way to the next stone. Seeing the chaos unfolds within the once civilized planet, the Other could only watch in comfort along with his fellow servants from the large windows of the Sanctuary II in great content and pleasure, believing that Thanos was somehow reliving the Order's mission, only done in his own motive and accords to restore the balance within the universe.

Seeking for the fourth stone, the Black Order were ordered by their adoptive father and master to raid the main planet of the Sovereign, where they slaughtered a few portion of its population and tried to take from the Soul Stone from the Sovereign's messianic figure Adam Warlock, but subsequently fails to do so, after they were all outmatched and overpowered by the latter during the battle. Proving Adam Warlock to be a lot more powerful than they had expected, the Order had to let Thanos arrive and help them deal with the the situation. He manages to combat Warlock all by himself, though at the cost of the Other's sacrifice after impulsively and selflessly throwing himself in the way to prevent the Warlock's powerful cosmic energy from obliterating him out of existence, still ending in Thanos' technical victor, having to successfully obtain the Soul Stone from the Sovereign defender and said universal messiah.

Retrieved from "https://marvelcomicsfanon.fandom.com/wiki/Other_(Earth-61615)?oldid=230222"
Community content is available under CC-BY-SA unless otherwise noted.