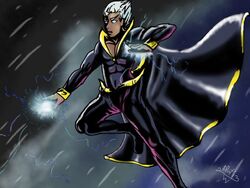 Generic Electromagnetism: Orson has largely undeveloped control over the electromagnetic spectrum, mostly using this ability to generate blasts of light.

Retrieved from "https://marvelcomicsfanon.fandom.com/wiki/Orson_Yoshida_(Earth-1175)?oldid=172105"
Community content is available under CC-BY-SA unless otherwise noted.