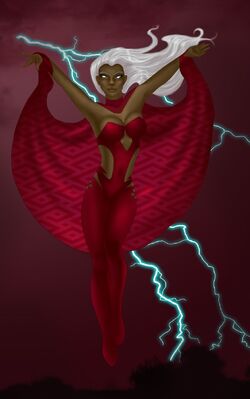 Ororo's history is exactly the same as that of Earth-616's Ororo Munroe up until the Marvel NEW! relaunch.

After the death of Charles Xavier at Cyclops' hands, Ororo fled the X-Men, and returned to Wakanda to regain her strength in the arms of Black Panther. After repairing the issues in her marriage, she tried to return to America, but Steve Rogers, Vision, and Justice came to Wakanda. They sought Black Panther for the Uncanny Avengers, and though not expecting Ororo, they welcomed her to join as well. He refused, but Storm agreed, seeing how this could keep the dream alive. She didn't have time to change out of her native robes, though, so she adopted them as a costume. When they were soon joined by the recently resurrected Nightcrawler, Storm was the first to discover that it was due to the Phoenix. She also temporarily gained the powers of Thor when it appeared that he perished, as well as briefly being seen with the Phoenix's powers.

Retrieved from "https://marvelcomicsfanon.fandom.com/wiki/Ororo_Munroe_(Marvel_NEW!)?oldid=35206"
Community content is available under CC-BY-SA unless otherwise noted.