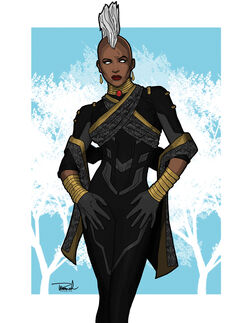 Earth-99828
Base Of Operations
The Outside
Characteristics
Gender

It's nice to finally stand alongside other Gods for once.

Ororo Munroe's mutant abilities developed at the young age of 9. Believing herself to be a goddess, Ororo used her abilities to gain control of the entire continent of Africa. By the time she was 18, she was met with opposition from all the other nations in the world, and has since obliterated most of them with floods, tornadoes, hurricanes, and more.

Storm was later recruited into the Renegades by Odin, when he needed a team who would follow him. Storm fought by his side, briefly, before she was killed by Cable.

Retrieved from "https://marvelcomicsfanon.fandom.com/wiki/Ororo_Munroe_(Earth-99828)?oldid=244581"
Community content is available under CC-BY-SA unless otherwise noted.