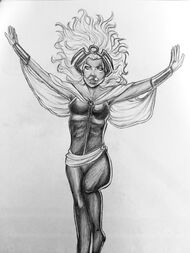 After hearing about the drought on Wakanda, she decided to help and she met T'Challa, and after a romantic moment in the huts, she agreed to help him with the drought and they got married, turning her into the Queen of Wakanda.

Charles asked the assistance of Ororo to find his adopted daughter, Emma Frost. They had no luck, but they eventually found her after tracking down The Brotherhood.

Normal human woman who engages in intensive regular exercise, and has been noted for her agility and swiftness. It has also been noted that Storm possesses reflexes, balance, and coordination that is well above the normal human level.

Retrieved from "https://marvelcomicsfanon.fandom.com/wiki/Ororo_Munroe_(Earth-82016)?oldid=175956"
Community content is available under CC-BY-SA unless otherwise noted.