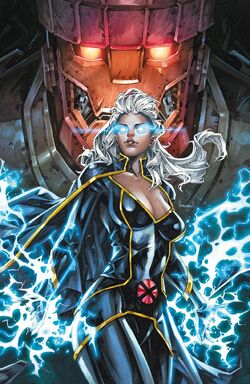 Rain, lightning, thunder, storm… Well, I tell you what, ladies and gents... You don't have to be a god or a goddess to summon the weather...

Ororo Munroe (born around the early 1980s) is a mutant, who is the descendant of an ancient line of African priestesses, and the potential to wield magic which would cause the notable distinction in their hairs and eyes as it respectively turns into white and blue (sometimes fully white) the moment their powers activate. However, this arcane truth about her lineage and ancestry were kept to her parents almost all her life due to the irreversibly-developing modernization of society, to the point that her relatives began to disregard their magical ancestry as a factual event. However, her parents would still often tell Ororo the stories of her ancestry, albeit in a tone that it was being retold as a myth just to keep their daughter as hopeful and ambitious as they wished her to be until she grows up. But one day came when Ororo was only two to three years old, when her she and parents were at buying goods at a street market in Cairo, a place that would be the setting of a local terrorist bombing. Having been at the site of the explosion at that second, Ororo's parents were unfortunately killed, leaving a weeping Ororo all alone. Homeless and orphaned, Ororo was found by a gang of vagabonds who trained Ororo in the arts of thievery, educating a young Ororo to excel in picking both pockets and locks.

Growing up as a pickpocket in Cairo, Ororo began to idolize both the X-Men and the Brotherhood, following the mutant group's alliance of heroism in Washington D.C., United States, against the Sentinels who tried assassinating the U.S. President along with endangering a group of civilians years earlier. After a failed burglary which got her into being berated by a group of older thieves in the late 1990s, Ororo was suddenly saved by the mysterious En Sabah Nur, who witnessed her using her weather-controlling powers in an attempt to escape the rival thieves. Afterwards she took him to her house, where the En Sabah Nur used his powers to connect to a television and discover all that happened on Earth during his slumber. Enraged by the progression of humanity without his presence, Nur decided that he would destroy the modern day civilization and reform it in his image, all for mutantkind. He used his powers to enhance Ororo's and turn her into his first Horseman. During the process, Ororo's hair turned white, unlocking and revealing her magical lineage which Nur claimed he has not seen since his reign thousands of years ago with one of his first Horsemen Famine, showing Ororo an enlightening memory that one of his former Famine was indeed, one of her ancestors who previously served Apocalypse before the fall of his reign. In her transformation as Famine, Ororo followed the footsteps of her ancestor in the modern era as a servant of Apocalypse.

She accompanied En Sabah Nur's recruitment of the other Horsemen, the kidnapping of Charles Xavier, and reconstruction of his mega-sized pyramid in the heart of Cairo. Ororo and the rest of the horsemen eventually turned on him, with Ororo watching in horror as Apocalypse unhesitatingly attacks her heroic idols with murderous intent. Altogether, she and her newly-found allies finally attacked Apocalypse with a thunderous lightning strike, along with Xavier and the other mutants in order to subdue him, but it wasn't enough, right until Jean has fully unleashed the Phoenix Force, for the very first time in her life, resulting in his second defeat. He was incinerated by Jean Grey through the Phoenix Force, and was apparently killed by the latter. With Apocalypse defeated, Ororo expected to contemplate in loneliness and was clueless on what to do with her life, as usual, only to experience the unexpected when she was welcomed by the X-Men themselves, her own idols, as they returned to the X-Mansion in the United States hoping that she'd accepted their offer. Ororo felt the heartwarming euphoria emerging deep from her heart, giving her the urge to simply say "yes" as she entered the Blackbird with the rest of her fellow selfless mutantkind.

As the X-Mansion was being repaired following Apocalypse's contemporary reawakening, Ororo remarked that she wants to stay, choosing to abandon the life of thievery and live a new start in Xavier's reputable sanctuary for young mutants, both as a student and a new addition to the X-Men, taking the appropriate moniker of Storm, a name that would eventually become memorable and loved by the thousands of people that she and her team had saved in their following missions. Living in the mansion with her new family, Ororo befriended fellow mutant youngsters including her best friend Jean Grey, Beast, Colossus, Kitty Pryde, and Logan. With it, she got to maintain a healthy mentee-mentor relationship with her wise professors. such as Warren Worthington II and Professor X himself.

Throughout the next few years of residing in New York, Ororo befriended a young man named T'Challa, who spent his time in the United States for half a year. The lingering closeness of the two have led to the point that she revealed her status as a mutant and as a member of the X-Men, much to T'Challa's adoration for her selflessness and bravery to look out for her fellow mutants. The pair shared a blooming romance and spent much time together. Unfortunate for her, Ororo's secret life as an X-Man along with T'Challa's status and duties as a prince prevented them from further exploring their undying mutual attraction, especially when T'Challa flew back to Wakanda with reluctance.

When the mysterious and diabolical Movement Alliance conducted a series of massive terrorist attacks all over the world destroying several famous and sacred landmarks, killing over 1,500 people on the very first day of their worldwide assault. Consequently, all the Movement's opposing adversaries, the heroes, were united into creating their own Ultimate Alliance, in order to stop and prevent the Movement from commencing its schemes upon world domination and authoritarian rule, before its too late. For the first time in her, Ororo and her teammates have never seen a conflict this atrocious and appalling and as they watch the ongoing news being reported across the world, especially after seeing his loved ones and people in danger.

The infamous and notorious villain of the X-Men known as Mister Sinister would intentionally led most of Magneto's loyalists into causing wreak and destruction on the city of Novi Grad, in Sokovia, without having any orders from Magneto, which immediately has gotten the attention of the X-Men, who went at the scene to figure out the situation. Little did the know, this strategy was one of the first known steps of Essex's plan as he would later unleash a larger event along with some the Earth's most powerful and villainous leaders, leading the Great Superhuman Movement. Setting their differences aside, Storm and the X-Men momentarily sided forces with Magneto's Brotherhood as the core members plan how to take out and defeat Sinister's Brotherhood faction, one of the core factors in forming the Movement.

During and after the conflict, Ororo incidentally crossed paths with the new Avenger Black Panther whilst they were both battling troops of Hydra and A.I.M. forces in the bombarded cities of New York, unaware at first that it was her first and only true flame T'Challa, someone whom she had never expected to meet since they last parted ways decades in the past. As the dust eventually cleared and victory was declared in favor of the ultimate alliance of the superheroes against the Movement, the two immediately agreed to meet in a classy private dinner, paid exclusively by T'Challa himself, wherein the two didn't hesitate spending their next following weeks to rekindle their once lost romance in the moment.

Homo Superior Physiology: Ororo was classified as an Omega Level Mutant. She is able to control the weather and atmosphere and is considered to be one of the most powerful mutants on the planet. One of the primary sources of her powers is the Earth's electromagnetic field. Storm's power and source of mutation is also mystical in nature, owing to her descent from a long line of arcane sorceresses.

Retrieved from "https://marvelcomicsfanon.fandom.com/wiki/Ororo_Munroe_(Earth-61615)?oldid=269072"
Community content is available under CC-BY-SA unless otherwise noted.