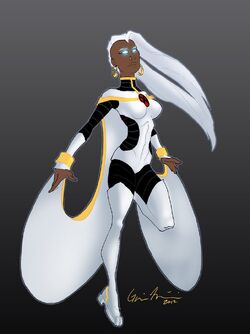 All forces of the Earth are mine, so let them slay the forces of stars!

Ororo Munroe is a native citizen of Wakanda. She was raised by her mother and the other women of her tribe. She was told that she was of a line of powerful sorceresses. She was therefore to be trained by them as the most powerful in their line. Unfortunately, this also meant that she could not see any other men. It would “ruin” the training. She was obedient, and soon became an excellent sorceress. Her strongest sorcery aspect was her weather control. She always admired the king, T'Challa. But to complete her training, she could never see him. Thus she threw herself into her sorcery, and soon began controlling the weather to aid in the health of her area. But she soon was regarded as a Queen, and she would soon meet T’Challa. She was terrified, as she liked him, but not enough to lose her powers. So she fled to Madagascar and enjoyed trouble-free worship there.

Soon, however, a massive energy spike was detected by the machine known as Cerebro. At this time, mutants were needed to save the X-Men, and this spike belonged to Storm. Charles Xavier was sent to find her, and he located her without much trouble, as there was a massive electrical storm in the sky. Charles located her and calmed her down, telling her that her powers were the result of her mutant nature, not sorcery. He asked her to join the X-Men to save his originals, and she told him that he was too weak for her to follow. She challenged him to a combat challenge, and the Professor shut down her brain. After 30 minutes of unconsciousness, he woke her up and asked her again to join, at which case she agreed. Her powers were intense, but of little use to her on Krakoa. She soon became a more willing X-Man and began dating Wolverine.

Weather Control: Storm has the mutant ability to control the weather in many different ways, generating certain weather phenomena, clearing them away, controlling temperature itself, generating lightning from her body, and controlling atmospheric pressure. She can shift her views of the world to see weather patterns, which she can then manipulate at will. She then becomes one with these energies, and can manipulate the weather of the entire planet, but she usually focuses on one spot.

Aerokinesis: Storm can shape the air to produce tornadoes, or levitate and fly. She can always sense where she is by how the wind flows around the surroundings, and she can fly at speeds of up to the top speeds of jets.

Lightning: Storm can summon lightning from the sky or from her own body.

Hydrokinesis: Storm can change the molecular structure of water, making it ice or steam, and can cause it to rain.

Note: Storm's powers are always adapting as her environment does.

Expert Combatant: Storm was trained in combat by Wolverine and others, and is an expert.

Weapons Master: Storm has been trained with firearms, bladed weapons, etc. in the X-Men.

Retrieved from "https://marvelcomicsfanon.fandom.com/wiki/Ororo_Munroe_(Earth-5)?oldid=59188"
Community content is available under CC-BY-SA unless otherwise noted.