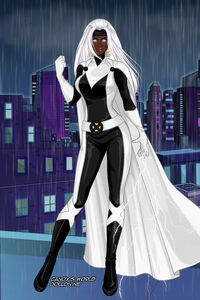 Years ago Ororo Munroe, also known as Storm, is the descendant of an ancient line of African priestesses, all of whom have white hair, and the potential to wield magic. Born Ororo Munroe, her mother, N'Daré, was the princess of a tribe in Kenya, who married the American photojournalist, David Munroe, and moved with him to Manhattan, where Ororo was born. When Ororo was six months old, she and her parents moved to Cairo, Egypt and, at the age of five, a plane crash destroyed their home. Ororo's parents were killed, but she survived, buried under rubble near her mother's body. This traumatizing effect left Ororo with the severe claustrophobia that still afflicts her today. Ororo managed to escape the rubble of her shattered home with nothing but the tattered clothes on her back and her mother's ancestral ruby. Homeless and orphaned, Ororo was found by a gang of street urchins who took her to their master, Achmed El Gibár. Achmed trained Ororo in the arts of thievery and she soon became his prize pupil, excelling in picking both pockets and locks. During her time in Cairo, Ororo picked the pocket of an American tourist. The man proved no easy mark, however, as he was Charles Xavier, a powerful mutant telepath who used his abilities to stop the theft. At that moment, Xavier was psionically attacked by another mutant, Amahl Farouk (absolute ruler of Cairo’s thieves), and Ororo used the opportunity to escape. Xavier, who acknowledged she was a mutant from her brainwaves, declined to contact Ororo at this point, not wanting to shock the young woman with the true nature of her powers. Years later, feeling a strong urge to wander south, Ororo left Cairo. During her travels, Ororo naively accepted a ride from a complete stranger and was almost raped by him. Forced to defend herself, Ororo killed the man and, from that moment, she swore never to take another human life. Ororo wandered for thousands of miles, almost dying during her trek across the Sahara Desert. Ororo's mutant ability to psionically control the weather emerged soon after and she was able to use them to rescue T'Challa, a prince of the African nation of Wakanda, from his would-be kidnappers. The pair shared a romance and spent much time together, however, T'Challa's duties as a prince prevented them from further exploring their burgeoning mutual attraction. Finally, Ororo reached her ancestors' homeland of the Kilimanjaro Valley on the Serengeti Plain in Kenya. Ororo was taken in by an elderly tribal woman, named Ainet, who taught her to be responsible with her powers. Ororo soon came to be the object of worship of the local tribes, who believed her to be a goddess due to her gift. Years later, Ororo found herself in the Savage Land and was forced to battle the threat of a mutant energy manipulator, who used Ororo's control over weather, known as Deluge, who sought revenge against humanity. With the help of the team of mutant heroes known as the X-Men, Deluge was seemingly destroyed and Ororo returned to her life amongst the tribal people. Months later, however, Professor Xavier was left with no choice but to recruit Storm, as he called her, and other mutants from around the world into the X-Men in order to rescue his original students from the threat of the sentient island being, known as Krakoa. Prof. Xavier explained to Ororo that she was not a "goddess", but a mutant and had a responsibility to use her abilities to help the world, just as she had helped the local tribes. Curious, Ororo accepted Professor Xavier's offer and was given the codename "Storm". After most of the original team left, Ororo, along with fellow new recruits Nightcrawler, Colossus, Wolverine, Thunderbird, and Banshee stayed as members of the new X-Men. The second group of X-Men was mostly adults and trained in the use of their powers in the Danger Room. Storm remained with the X-Men for years. Storm was initially very naive when it came to the customs of the modern world, but her teammate Jean Grey (Marvel Girl), helped educate her in the ways of society and the pair formed a lasting friendship. Jean was also one of the first X-Men to learn of Storm's claustrophobia, after the two women chased a thief into the subway. After serving with the team for many years, Storm was appointed leader of the team following the departure of former leader, Cyclops, after the apparent death of Jean Grey. Storm was initially unsure about her new role, but, with the support of her teammates, she soon became a capable leader. Ororo began her friendship with Kitty first, by christening Kitty with her first codename, Sprite, and even took her dancing at Stevie Hunter’s studio.

When Cyclops eventually returned to the team, Storm found herself doubting her leadership abilities once more, after a mission she led went wrong. However, Ororo soon asserted her position, reminding Cyclops that she was now team leader.

After sensing that Arkon was in danger, Storm, the X-Men, and the Fantastic Four aided him in battling the Badoon. Storm and Arkon admitted their love for each other, but decided that their responsibilities were more important.

Storm is a potential omega level mutant. One of the primary sources of her powers is the Earth's electromagnetic field.

Her manipulation of energy is extensive, and encompasses all of the energy systems and natural forces that pattern weather (i.e. - electric, wind, thermal, electromagnetic energy, etc.). Her powers adapt to the environment she is in so she has been able to summon the energy of stars while in the vacuum of space and manipulate solar wind, and control the energy forces of other planets and dimensions. Due to very good training from an early age, Storm can use her powers to set many weather patterns out of place to perform/create exotic feats/effects, and then set them back from where she got them from, putting weather patterns back to their natural state. Thus, she can disperse any storm she generates as long as she uses her powers wisely, considering the fact that it's easy for her to create weather, but more challenging to disperse it, or, "clear it up". However, Storm may have more to her power arsenal than she shows, as she not only generated unnatural pressure on earth, but also manipulated (and intensified) plasma while in the earth's atmosphere. She has demonstrated extreme resistance to electric attacks and the ability to counter elemental assaults that fall under her purview.

Storm's range of control over weather extends over a vast area. She has diverted jet streams so as to create storms over the entire East Coast of the United States. It should be noted that Storm has on two occasions tapped into electromagnetic energy to enhance her powers. Once to stop a blizzard over Canada and second to create a cosmic-level turbulence around the Earth to block solar radiation. She can create weather effects within indoor areas or within artificially maintained environments: for example she could create an indoor rainstorm. She can create weather effects over very small areas; as when she waters her potted plants. Using her precise control over air she has even been shown to control the very air in a person’s lungs.

Retrieved from "https://marvelcomicsfanon.fandom.com/wiki/Ororo_Munroe_(Earth-16160)?oldid=236417"
Community content is available under CC-BY-SA unless otherwise noted.