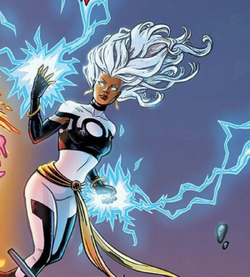 I am not a Goddess, despite what some may think about me. I am a mutant, and we are here to stay.

Born in a small Kenyan village, Ororo Munroe was taken in by the swindler Amahl Farouk, who took advantage of Ororo's mutant abilities as soon as they manifested. He soon had the people of his village worshiping her as a Goddess so that he could become rich beyond his wildest dreams.

One day, a young man named T'Challa wandered into the village and was the only person to see Ororo for who she really was. They instantly became very close and formed a spiritual bond. Ororo confided in T'Challa that she hated her life, as she had no idea what she truly was. T'Challa felt the same way, as he was secretly the Prince of Wakanda, and had no interest in becoming the King.

Ororo was heartbroken when T'Challa had to leave, but it wouldn't be long until she was tracked down by a man named Charles Xavier, who told her the truth about herself. She was a mutant, and so was Amahl Farouk. Xavier and Farouk, who called himself the Shadow King, engaged in a psychic battle, which resulted in Farouk being out to the entire village and forced to go on the run.

Charles then took Ororo back to America with him and adopted her, promising to train her to hone her abilities and introduce her to more mutants. Her fellow adopted sister, Jean Grey, was also a telepath, became her best friend right away. Over time, they were introduced to fellow mutants Erik Lehnsherr, who was Xavier's partner, as well as Hank McCoy and Warren Worthington.

Years passed, and after Erik and Xavier split up, he formed his own Brotherhood of Mutants. Consumed with grief, Xavier was ill prepared for when the Brotherhood kidnapped him in an attempt to sway him to their point of view. Xavier's students were then rallied together by Scott Summers, who convinced them to work as a team and use their powers to save Xavier.

They then opted to remain together as a team of heroes to inspire the rest of the world and convince them that mutants are not a menace. They called themselves X-Force, and over time continued to recruit more and more mutants. Eventually, the X-Force met the Avengers, and Storm and the Black Panther instantly recognized each other. After years of longing for each other, Ororo and T'Challa were finally reunited, and it wouldn't be long until they were married.