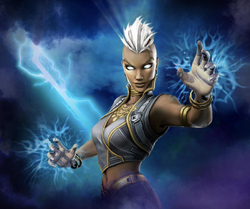 Earth-10023
Base Of Operations
The Nexus
Characteristics
Gender

My voice has been described as a strike of lightning during a rainstorm by Rolling Stone Magazine, so, yeah, I think I know what I'm talking about.

Ororo Munroe hails from a reality where most mutants and humans live in harmony. There has never been any need for the X-Men or the Brotherhood of Mutants. Ororo gained fame in her early life for helping impoverished African villages adapt into new climates, but she never wanted to be worshiped as a god.

She eventually met and became friends with another mutant named Alison Blaire, who used her powers to perform as a singer. Ororo was intrigued by this, and the two decided to form a band together. They recruited Marian Carlyle to play bass, Paige Guthrie to play guitar, and Neena Thurman to play the drums. The five of them quickly became a worldwide sensation as the Dazzlers, the most popular all mutant band in the world.

During their ninth world tour, however, the band ran into some complications. Their stop in Singapore had riled up some cultists who detested human/mutant peace, and used stolen arc reactor technology in an attempt to assassinate the band. Ororo was able to manipulate the wind in order to blast her teammates and fans to safety, but was then immediately caught in an energy blast.

However, Ororo did not perish. She was instead plucked from her reality by the Silver Sentry, who placed her onto the multiverse hopping Team X. It took Storm some time to adapt to the violent nature of Team X's missions, but she found solace in forming friendships with her teammates who had known alternate versions of her.

Storm was eventually able to get the hang of being a reality jumping superhero, and eventually became one of the last remaining team members alongside the Scarlet Witch, while their previous teammates had up to this point been replaced by Spider-Girl, Lightspeed, Iron Man, and Scorpion. Although she missed the teammates she had gotten close with before, Storm was always quick to accept any new friends into her life.

Team X eventually found themselves on a world where the Russian division of Weapon X had partnered with the Red Room to breed weapons of mass destruction through mutant DNA, trained by the Black Widows. While the Team's mission was to rescue the child that had been bred from Wolverine's DNA, Storm ran into complications in the form of Omega Red. While she was able to abscond with the baby, she and Spider-Girl were pursued by Omega Red. Storm knew she couldn't get into a fight with the baby, so she handed it over to Spider-Girl and stayed behind to fend off Omega Red. She fought valiantly, and was able to mortally wound him, but not before he succeeded in using his tendrils to absorb her electricity and redistribute it back into her body, making her completely overload with power, claiming her life in the process.

Retrieved from "https://marvelcomicsfanon.fandom.com/wiki/Ororo_Munroe_(Earth-10023)?oldid=255208"
Community content is available under CC-BY-SA unless otherwise noted.