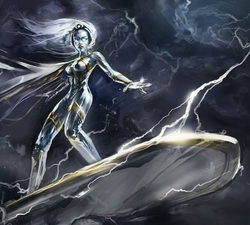 Dimension 0
Base Of Operations
The Milano
Characteristics
Gender

Come, friends, we have a galaxy to guard.

Ororo Munroe was raised as a thief in Kenya before she was taken in by Charles Xavier, where she was trained as one of the X-Men. She would even go on to marry the Avenger, Black Panther.

Storm later fought alongside her friends and family against Thanos. During the battle, however, she was forced to watch as her husband was killed by having his Vibranium suit transmuted into lead, causing him to suffocate to death. She later even went on to be imbued with the Power Cosmic by the dying Silver Surfer.

Becoming the Stormrider, she joined the newest iteration of the Guardians of the Galaxy, which had been formed out of mostly former Earth heroes that felt they had a greater purpose in the stars. Together, they work to free planet by planet from Thanos's unflinching rule.

Retrieved from "https://marvelcomicsfanon.fandom.com/wiki/Ororo_Munroe_(Dimension_0)?oldid=264159"
Community content is available under CC-BY-SA unless otherwise noted.