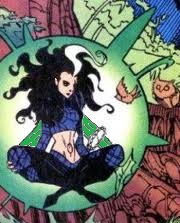 Orlaith is the daughter of the Asgardian Heimdall and Tink.

Orlaith is a hybrid Asgardian and Fairy and possess powers granted to her both by her mix DNA and inherit magical abilities. She is a powerful sorceress using both nature magic and spells. She also possesses a gifted intellect, and as a former pupil of Stephen Strange and Frigga, and Hela, she possesses a great deal of magical lore, considered one of the greatest sorceresses in 2099's history.

Orlaith possesses all the typical superhuman attributes common go the Gods of Asgard.

Sorceress Supreme: Orlaith has become the Sorceress Supreme of Asgard, possessing vast magical powers. She has exhibited such abilities as forming and throwing magical bolts of energy, conjuring objects and energies, teleporting, telekinesis, controlling others’ minds, and casting illusions. Presumably, she is capable of replicating any spell performed by her former mentor, Doctor Strange, Frigga and Hela.

Class 50; She is stronger than the average Asgardian woman and Fae woman, and is able to lift 30 tons without her magic. With magic she is capable of lifting well in excess of 100 tons.

Retrieved from "https://marvelcomicsfanon.fandom.com/wiki/Orlaith_Heimdall_(Earth-928.2)?oldid=206589"
Community content is available under CC-BY-SA unless otherwise noted.