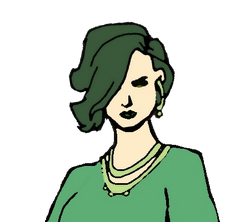 Fear holds you back. Weakness brings you down.

Not much is known about Madame Hydra. Her father was the former leader of Hydra until Peter Parker killed him. Ophelia took his place as leader, and uses young children as her new agents for her new generation.

Madame Hydra is a brilliant and cunning criminal strategist who has been rigorously trained in various martial arts. She is also a skilled markswoman and expert in the use of a bullwhip. Ophelia is highly skilled in the management of criminal organizations and very well connected in the international criminal underworld. She is also a master of stealth and espionage. Perhaps her greatest strengths are her influence, the financial resources at her disposal due to her stature in organized crime, and an uncanny luck which has allowed her to cheat death in situations where lesser people would have died.

Madame Hydra is also extremely knowledgeable in the properties and uses of toxins, poisons, and snake venoms, frequently creating her own poisons that she spreads through her poisoned lipstick.

Equipment: Protective Battle Armor - In very rare occasions, Madame Hydra uses a Green Kevlar/metallic armor that gives her protection in dangerous mission.
Transportation: Various HYDRA vehicles.
Weapons: Madame Hydra carries a set of throwing darts tipped with a lethal poison based on the chemistry of snake venom. She also uses mundane weapons such as whips and guns alongside high-tech weaponry provided by HYDRA.

Retrieved from "https://marvelcomicsfanon.fandom.com/wiki/Ophelia_Sarkissian_(Earth-1342)?oldid=226996"
Community content is available under CC-BY-SA unless otherwise noted.