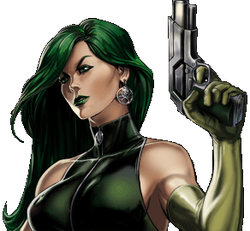 Black
Unusual Features
Hair sometimes dyed green, right side of Madame Hydra's face is scarred and disfigured, although cosmetic surgery over the years has made this condition somewhat better. She disguises her disfigurement by wearing her hair in such a manner as to cover much of the right side of her face. Madame Hydra has elongated sharp canine teeth caps.
Status
Citizenship

Born in the 1920s, the woman who would become Viper was orphaned as a child. Allying herself with the Elder God Chthon, who greatly slowed her aging, she became a mercenary and then a pupil of the adventurer Seraph on the island nation of Madripoor. Later, Viper and Seraph rescued another pupil, the mutant adventurer Wolverine, from his arch-nemesis, the feral mutant Sabretooth. Seraph died, but not before making Wolverine swear an oath of loyalty to Viper.


Viper was eventually recruited into the terrorist organization HYDRA. Taking the name Madame Hydra, she took control of their New York operations and frequently clashed with the super-soldier Captain America. She later reorganized the then-defunct Serpent Squad group and killed the original costumed criminal Viper, taking his alias. Acquiring the ancient and powerful Serpent Crown artifact, she sought world domination but was again opposed by Captain America.

Viper is a brilliant and cunning criminal strategist who has been rigorously trained in various martial arts. She is also a skilled markswoman and expert in the use of a bullwhip. Viper is highly skilled in the management of criminal organizations and very well connected in the international criminal underworld. She is also a master of stealth and espionage. Perhaps her greatest strengths are her influence, the financial resources at her disposal due to her stature in organized crime, and an uncanny luck which has allowed her to cheat death in situations where lesser people would have died.


Viper is also extremely knowledgeable in the properties and uses of toxins, poisons, and snake venoms, frequently creating her own poisons that she spreads through her hollow fangs or poisoned lipstick.

Equipment: Teleportation Ring - Viper employs a teleportation ring that activates when twisted.
Transportation: Various HYDRA vehicles.
Weapons: The Viper carries a set of throwing darts tipped with a lethal poison based on the chemistry of snake venom. She also uses mundane weapons such as whips and guns alongside high-tech weaponry provided by HYDRA.

Retrieved from "https://marvelcomicsfanon.fandom.com/wiki/Ophelia_Sarkissian_(Earth-1010)?oldid=192621"
Community content is available under CC-BY-SA unless otherwise noted.