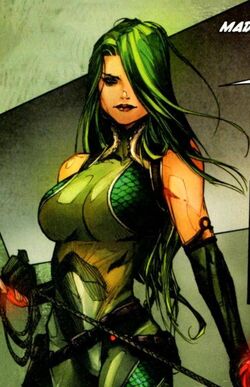 Ophelia Sarkissian was born to a Hungarian assassin, who traded her to Hydra in order to repay his debt. She was then raised to become an assassin for Hydra.

As she reached adulthood, she was named Madame Viper, as she had undergone genetic experimentation to cross her DNA with that of a snake, which made her extremely agile and able to secrete poison. She quickly became an infamous assassin and was always Hydra's go to for missions they deemed not important enough for the Winter Soldier.

At one point, Viper found herself in battle against the British vigilante, Union Jack. Desperate to best her, Union Jack burned her face and beat her nearly to death before she was able to poison him, causing him to convulse and die from a heart attack.

From that day on, Viper began to hate anyone who called themselves a hero, because she knew that deep down they were all savages. This led to her becoming incredibly involved in Hydra's war against the Avengers, eventually fighting against Captain America, who she became fascinated with. His moral compass seemed unchangeable and truly righteous, so she decided it was now her responsibility to break Captain America. After she discovered his past with the Winter Soldier, she realized she could kill two birds with one stone and manipulate them into taking each other out.

Retrieved from "https://marvelcomicsfanon.fandom.com/wiki/Ophelia_Sarkissian_(Earth-101)?oldid=247731"
Community content is available under CC-BY-SA unless otherwise noted.