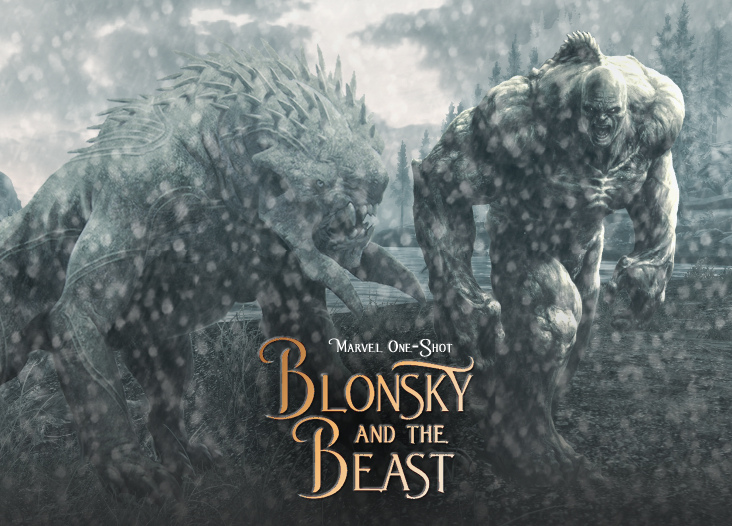 Suddenly, the tranquility is broken by two objects hurtling out of the sky and crashing to the ground just outside the cave. Cut to reveal the two objects as Thor and Malekith crashing outside the ice cave on Jotunheim in Thor 2. From the cave, the Frost Beast leaps out to attack. Just as in the movie, he misses, instead crashing into the ground, causing it to give out under the three of them, and fall into a portal, transporting them all to Greenwich, on Midgard.

On Earth, the Frost Beast appears, crashing into a building, and immediately running into and attacking the Dark Elves chasing Darcy and Ian. Unphased, he takes off, crashing and causing destruction before being distracted by a swarm of birds, enchanted.

Cut to days later. We are now watching the Frost Beast from afar, as it is lying down watching the swarm of birds in the lot from the Thor 2 end scene. Just off camera we hear whispers:

"Yes, Fitz, it is very big. That is very obvious. But it takes only 2 milligrams of Carfentanil to sedate an African Elephant. You have given me 5 ...Grams!" We reveal Jemma Simmons as the whispering voice, talking to Leo Fitz, just at the edge of the lot, behind the Frost Beast.

"Thor and his friends get to come in, make a mess, and then fly off without bothering to deal with the consequences, which means, we have a lot of debris to sort through and analyze! All I am saying is, no one will miss this little guy if he..." Fitz trails off but emphasizes his point by making a dead face and a throat slashing gesture with his hands.

Closeup to the Frost Beast. Eyes wide, and then quickly, eyes rolling back and closing. His head droops and slams to the ground - SMASH CUT to the Beast with his head on the ground in a dark room. Pull out to reveal its a cage/cell.

An alarm goes off in the background, slowly building to the audience and the Beast. The Beast opens his eyes, but otherwise unmoving or interested. Add to location title: TWO MONTHS LATER - HYDRA UPRISING.

Gunshots and small explosions come into focus as the action moves closer. People run through the shot and fight. S.H.I.E.L.D. vs Hydra. A big blast from the end of the hall opens it up, and out steps a familiar face. Emil Blonsky. He's having fun, enjoying the chaos. Taking out whoever he can, Hydra or S.H.I.E.L.D., indiscriminately, releasing prisoners as he goes.

He gets to the Beast's cage and stops, with a smirk. The Beast raises its head slightly.

Blonsky is suddenly hit from behind by a laser weapon. He is tossed to the ground, his back smoldering with a seemingly lethal wound.

Close on Blonsky's face, we see him grimace and he grunts, "You shouldn't have done that" as he transforms into the Abomination.

The Abomination smashes the unidentified assailant, and smashes open the Beast's cage, setting him free. Abomination goes on a tear, attacking everything and everyone he can as he busts his way through the walls to open winter-Alaska wilderness, and the Beast following behind him, cleaning up any scraps, like a hungry dog.

A crack is heard in the trees behind them, and a low growl. Abomination looks up, nearly unfazed.

"Bear", is all he grunts, and the Beast gets up excitedly, and takes off into the dark trees. Abomination goes back to staring at the fire.

A whimper in the forest, and the Beast is hurled back into the small clearing where the fire is.

Abomination jumps to his feet, as the Beast stumbles to his, and sees a glowing pair of eyes approaching in the trees.

Abomination grunts as a massive and crazed hulk of white fur jumps out at him, teeth gnashing and razor sharp claws slashing. The cooking meat attracted the attention of a starving Wendigo. Abomination instantly engages the rabid creature, and a skirmish ensues with the three monsters fighting in the fire light.

The Wendigo gets a few good licks in on the Abomination in the fight, only making Abomination angrier and stronger. Furious. After a few rounds of combat, Abomination stabs the Wendigo with a burning log from the fire, and tears the monster's head off.

With Abomination annoyed, and the campsite destroyed, Abomination sulks off, unaware that the Wendigo was part of a pack... The Beast follows him, limping, but happy. Shortly after Abomination leaves, several more hungry Wendigos swoop in and consume the corpse of their pack member and devouring his remains.

We cut to a new camp with Abomination and the Beast sitting around a fire again, wounds healed (suggesting some time has passed), motionless and emotionless, like a hunter and a hound. Suddenly, the chopping of a military helicopter can be heard in the distance. It's coming for them, and Abomination knows it.

We close out with a hungry smile from Abomination, welcoming the fight.

Retrieved from "https://marvelcomicsfanon.fandom.com/wiki/One-Shot:_Blonsky_and_the_Beast?oldid=260532"
Community content is available under CC-BY-SA unless otherwise noted.