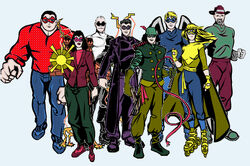 The original five members of the team received their powers after an invention exploded. Robert Edge is a brilliant scientist but he does have a bad tendency to mess with things he shouldn't. He's the type that might push a button before asking, "What does this button do?" Robert got his hands on some alien technology and incorporated it into a robot that he was building. He knew that this technology would tap into ambient energy sources even when those sources were scarce and that this would give his robot additional powers although he did not know exactly what those additional powers were. This technology proved unstable and blew up. Acrobat Adept was there when it blew up and helped to save Robert and four teenagers from the explosion.

Acrobat Adept was there because he had been trying to be a private eye but was having very little success. Robert's robot was intended to assist Acrobat Adept be more successful. Robert knew Acrobat Adept's secret identity because Acrobat Adept was his godson and named Bobby Ridgeway. After the explosion, Acrobat Adept took Robert and the four teenagers to his dad, Dr. Travis Ridgeway. Dr. Ridgeway set up a secret clinic in an unused portion of the hospital to care for these patients as it was quickly apparent that they were transformed by the explosion. Robert had turned invisible. Eric Raider was suffering burns and convulsions as if he was being electrocuted but he was still alive. Marcie Bayern had stuff pouring from her fingers. Julie Williams-Smith was surrounded by whirlwinds. And Jason Radcliffe kept falling through the floor.

After recovering and gaining some control over their new found powers, these people decided to form a team of private eyes. Acrobat Adept also joined and Dr. Travis became the seventh team member going by the codename Doc. Not long after, the team recruited the assistance of Jeremy Westcott, Joshua Jackson, and Kassandra Thumb.

Even before the explosion, the Acrobat Adept had been having encounters with a minor crime boss by the name of John Biyon. Mr. Biyon was assisted by Jaguar (Earth 49996) and the Eye. About the time of the explosion, Mr. Biyon was beginning to recruit more mutants primarily by finding teenage mutants that were living on the streets because they were runaways or kicked out of their homes. These recruits included Miro (Earth 49996), Psyche (Earth 49996), Rage (Earth 49996), and Duster. Duster was the best friend of Eric Raider. This guaranteed that the future of Omniteam and the future of Biyon's Army would always be intertwined.

Retrieved from "https://marvelcomicsfanon.fandom.com/wiki/Omniteam_(Earth_49996)?oldid=198417"
Community content is available under CC-BY-SA unless otherwise noted.