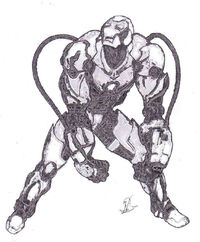 Oliver Rhodes was born to James Rhodes (War Machine), and an unknown mother. His mother died shortly after his birth. Rhodes decided to keep Oliver a secret, and only his father even knows he exists. At an early age, he discovered the ability to manipulate technology, but kept it a secret, as there was no one who really cared about him. Even his father rarely did anything fatherly. Oliver learned at an early age, that if his father could not watch out for him, he would have to watch out for himself.

One of the things that Rhodey did do for Oliver was tell him stories of his good friend Iron Man. He told him that Stark had always needed someone else looking out for him other than himself. When Oliver asked how he could watch out for someone as powerful as Iron Man, James gave no answer. For an as-of-yet unknown reason, he could not tell his son that he was War Machine. Hearing tales of the Avengers made the younger Rhodes want to be more than a nobody. He wanted to be a hero.

One day, a news program was leaked, stating that the new Avengers had been captured, he saw the footage that the Super-Skrulls sent to Earth. He noticed that one of them was missing. That one was Iron Knight. He set out to find him, and told him that he wanted to help him free the Avengers and fight the Skrulls. He created parts for another armor, and they flew by themselves onto Oliver. Shocked, he asked who he was. He replied, "No one knows who I really am. It is likely that they never will. But now..." (he lowered the face-plate) "... I am a BattleBot." The story was set that he was one of Iron Knight's A.I.'s, and no one ever questioned otherwise.

Oliver is a mutant with technopathy: the ability to communicate with and control machinery.

Oliver is smarter than most men, and has knowledge, but not training, in most kinds of combat.

Equipment: Battle Armors: Oliver wields the BattleBot armors. He claims there are 4, though the public has only seen 3. The baseline ability set is this:

Despite being the young War Machine, the public believes him to be one of Iron Man's A.I., the young Vision.

Retrieved from "https://marvelcomicsfanon.fandom.com/wiki/Oliver_Rhodes_(Earth-1175)?oldid=87294"
Community content is available under CC-BY-SA unless otherwise noted.