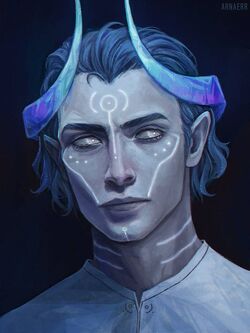 We are, all of us, yet to see the full picture. It will reveal itself when the time comes. I assure you, hurrying destiny will only come back to harm you.

Oliver Martinez was once a noble man, helping his aging parents in their poor village. However, things began to change when he started to see things on a much deeper level. He saw the molecular structure or everything around him, if he focused hard enough he could even see the atoms in the air he breathed. Initially, Oliver believed he was going insane, but when he was able to notice his father's cancer getting worse, he came to the conclusion that he was something else.

He looked inside himself and was able to determine his genetic code was that of a mutant, which only became clearer as his outward appearance began to mutate further. The other villagers began to believe he was a demon and tried to kill him, but his secondary mutation then manifested, and he was able to project bursts of light severe enough to kill everyone present, including his parents. Horrified, Oliver went on the run, initially intending to use his gift to help people who couldn't see the whole picture.

Unfortunately, everywhere he went he was treated like a monster and a pariah. This led to him developing a disdain for humanity, which would go on to be utilized by Magneto, who was expanding the ranks of his Brotherhood following the massacre on the island of Genosha. Oliver had heard of this tragedy, and happily accepted Magneto's offer to use his gifts to further prevent such tragedies from befalling their species in the future.

Retrieved from "https://marvelcomicsfanon.fandom.com/wiki/Oliver_Martinez_(Earth-101)?oldid=250440"
Community content is available under CC-BY-SA unless otherwise noted.