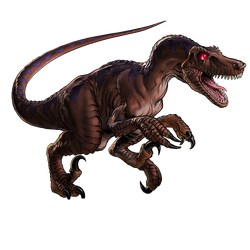 Old Lace's origin is the same as that of her Earth-616's counterpart.

Old Lace is a genetically engineered Deinonychus from the 87th Century commissioned by the Yorkes using their 4-D Time Portico to protect Gert in case of their deaths. Old Lace has the following abilities:

Retrieved from "https://marvelcomicsfanon.fandom.com/wiki/Old_Lace_(Earth-1010)?oldid=259354"
Community content is available under CC-BY-SA unless otherwise noted.