Marvel Fanon
Register
Don't have an account?
Sign In
in: Characters, Templated Articles, No Dual Identity,
and 9 more 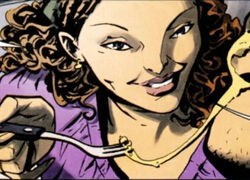 Oksana (Russian: Оксана Сицевич) was a waitress at a diner located in the first bus stop after leaving Ryker's Island, where generally ex-convicts dined after being released from prison. One of the ex-convicts she knew was Aleksei Sytsevich.

Later on she got fired for being mean to the customers. Aleksei encountered her and asked her to have dinner with him. They eventually got married and lived in a small apartment in Yonkers.

In an attempt to convince Aleksei to join the Sinister Six, Norman Osborn sent his OsCorp agents to kill her, making it look as if it had been Spider-Man.