-Bobbi…- Clint whispered, pulling an arrow out of his quiver and pressing it against his bow. Exploring the surroundings, the Golden Archer found an entrance to a cave. -What is this?- He muttered, as he found an elevator at the end of the rocky hallway. Pressing a button, Barton started descending, until he found a laboratory, where Vibranium was being forged into weapons.

-This must be Wakanda…- Hawkeye commented to himself. Suddenly, he heard a noise behind a wall. Ready to shoot, Barton rolled on the floor and aimed his arrow at the figure on the other side, who was aiming a gun at him.

-What are you doing here, mate?-

-Looking for Mockingbird, what about you?-

-I am also looking for Bobbi.-

-I thought you two had divorced…-

-We are. And I thought you two had broken up.-

-Technically… I wouldn’t know. She had been distant… Even before she went M.I.A….-

-Sounds like we both had our issues with Bob. Anyway, Director Coulson sent me here to look after her.-

-Of course he did.- Hawkeye rolled his eyes.

-I don’t kid you, mate. Anyway, we are both here for the same reason, right? We better team-up instead of argue over this nonsense.-

-I agree with you for once, Brit.-

The two men started exploring the laboratory and walked past a large vibranium gun that was being forged.

-I wonder who set this up.- Barton muttered.

-I am still very confused about this whole villains thing. I would so skip the superpowered beings. Inhumans and all that… Not my thing.-

-I have faced superpowered before. And all I have is a bow and arrow.-

-Tough luck, Robin Hood. I share team with a cyborg, an Egyptian wizard and a lass who can literally break the world apart.-

-Try beating working with a green giant with anger issues and the literal God of Thunder.-

-Hunter? Clint?- A faint voice muttered from the distance.

-Bobbi!- Both men said at the same time, and ran to her direction.

The Agent of S.H.I.E.L.D. was sitting down inside a cell, her arms on her knees. As soon as the two men got in front of the bars, she stood up and walked to them. -You… You are here.- She smiled.

-Move aside!- Hawkeye yelled, pulling an explosive arrow and shooting it at the cell door, opening it instantly.

As the three turned around, they saw a robotic woman standing in front of them. -How… Odd.- The robot walked towards the heroes slowly. -Mockingbird and her two lovers… In the same spot. In the past two years I’ve been able to talk a lot with the lady here. Am I right, Bobbi?-

-Do you know her?- Lance asked, raising an eyebrow.

-That’s… That’s Jocasta… She… She was created by Ultron using Jan’s brain pattern.-

-Like the tragedy, Oedipus Rex. Oedipus kills his father, Laius, and marries her mother, Jocasta. That perfectly explains Ultron’s situation… Killing Hank, marrying Jan… Except my… “Sister” didn’t love him back. So he created me. However, our love didn’t last long, since he was tragically killed by the Avengers.-

-What a twisted, sick version of reality…- Hunter muttered.

-Why have you kept Bobbi around here for so long?- Clint asked.

-And you still follow them… Even though he has been dead for more than two years?- The British man asked, chuckling.

-Ultron is never truly dead, Lance.- Jocasta shook her head, before pointing to one of Hank’s early concepts for Ultron’s head.

-Oh, you betray our friendship so fast?- The robot pretended to be hurt.

-I don’t have Stockholm Syndrome, Jocasta.- Morse noted, pulling her broken goggles off, before hitting her with her staves, as Clint and Lance joined in with their respective weapons. Unaffected by bullets and regular arrows, Hawkeye pulled an explosive arrow out and fired it at the robot, who immediately created a force field around herself.

-What?!- Clint looked at Bobbi, who shrugged.

Jocasta then shot blasts of energy from her eyes, which the heroes dodged easily.

Suddenly, some male voices were heard and Jocasta, grabbing Ultron’s primitive head fled from the lab. The heroes hid behind some crates, as three men walked inside the lab. One of the men looked at the lab, smiling widely. Picking up a purple gem, he looked at it.

-Pure vibranium…- The man smirked, looking at the other two men. -The Reaper will be glad.-

-I have a feeling I’ve heard of this man before…- Clint muttered. -I am pretty sure Stark used to do business with him while he was in the weapons business.

-WHO IS THERE?!- The leading man asked, putting the gem down. Picking the gun the heroes saw being forged, he walked towards the crates.

Lance stood up and fired his gun at the men, before hiding behind the crates again. In retaliation, the leading man pulled the trigger, firing a sonic wave at the crates, tossing the heroes back.

-The Avengers!- He exclaimed.

-Technically, I’m not an Avenger, mate.- Hunter replied, and the man fired his sonic gun at them again.

-Mr. Klaue, what shall we do now?- One of the henchmen asked. -They found our secret lab.-

-I know… The Reaper will be furious…- Klaw shook his head, looking at his henchmen but still pointing his gun at the heroes. -Get everything back in the crates. We need to set up a new lab.- When the arms dealer looked back at where the heroes were, he found nobody.

-We… We were found by the Avengers.-

-I… I don’t know, Reaper. This laboratory is practically invisible.-

-Not enough, apparently.- Grim Reaper muttered, before cutting Klaw’s right arm off with his scythe as the man fell to the ground. Cauterizing the wound, he picked up a sonic emitter from a crate. -It’s time for you to be more like me.- The HYDRA member muttered and pressed it against Klaw’s stump, using the sonic emitter as a prosthetic. -Come with me to a HYDRA base, we need to make this weapon function.-

As the two villains walked away, Hank Pym watched this unfold in San Francisco. -I need to warn the Avengers.- He muttered.

Hawkeye getting his bow ready

"The Reaper will be glad." 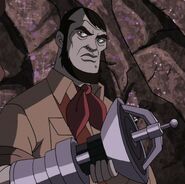 "I need to warn the Avengers."
Add a photo to this gallery

Retrieved from "https://marvelcomicsfanon.fandom.com/wiki/Oedipus_Rex_(A!)?oldid=204684"
Community content is available under CC-BY-SA unless otherwise noted.